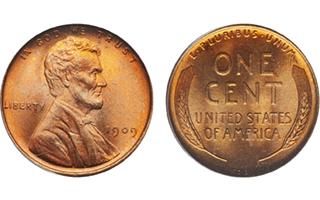 The answer is in survival rates. In 1909 the Lincoln cent was brand new, and collectors and noncollectors alike each wanted one to hold onto. Further, the designer Victor David Brenner’s initials placed prominently at the lower center of the reverse and their subsequent removal later in 1909 brought a lot of attention to the Lincoln cent.

The price is kept high for the 1909 Lincoln, V.D.B. cent because it’s in demand from several hobby sectors. It is considered a distinct design subtype, so it has demand from type collectors. Some people collect first-year-of-issue coins, and others are attracted to the coin because they remember the story from their earliest collecting days.

In MS-66 red, the price for a 1909 Lincoln, V.D.B. cent drops substantially, with recent sales for gorgeous CAC stickered coins clustered at the $250 to $300 level.