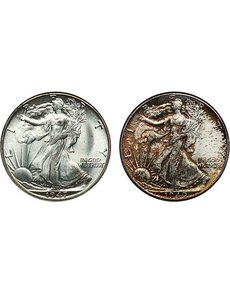 The market prefers untoned Walking Liberty half dollars over toned examples, as illustrated by the prices these two MS-65 examples brought recently.

Demand is broad for Mint State Walking Liberty half dollars and many issues have seen prices increase steadily in the last month.

As of May 25, there are at least five wholesale buyers who are aggressively buying MS-64 to MS-66 Walking Liberty half dollars in large quantities to fill orders. At the wholesale level, MS-64 examples are priced at $56, MS-65 pieces are at $131 and MS-66 coins are being sought in large quantities for $190 each.

The retail prices that collectors are paying for the half dollars have not yet caught up to the wholesale demand. For example, at a May 24 Heritage Internet Coin Auction with broad participation, a mostly brilliant 1947-D Walking Liberty half dollar graded MS-65 by Numismatic Guaranty Corp. realized just $126.50 over eight bids, despite several wholesale dealers offering to buy any brilliant MS-65 example for $131.

To contrast, a toned 1940 Walking Liberty half dollar in NGC MS-65 realized just $104. As with the recent action for generic Morgan and Peace dollars, demand is reserved for coins that are untoned, or very nearly so.

The market’s appetite for Walking Liberty half dollars goes up to more expensive issues. A look at recent auction results reveals that there is especially strong demand for the tough early Denver Mint issues in MS-62 through MS-64.

At the same time, buyers have become increasingly choosy with conditionally rare late-date (post-1933) issues. Wide price ranges at auction for coins of the same date, grade and grading service show that buyers are looking for more than just a grade when selecting coins for grading service’s registry sets.

At Heritage Central States Numismatic Society convention auctions in late April, just five of the 310 Walking Liberty half dollars offered failed to find bidders — each was a high-grade late-date issue. Buy-ins like these are often the result of the consignor having more enthusiasm about a coin’s value than the bidding audience. ¦