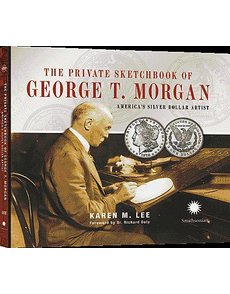 One researcher’s discovery in the Smithsonian Institution’s National Numismatic Collection in 2004 set another researcher on a path to explore the behind-the-scenes life of one of America’s most famous coin designers.

A new book by National Numismatic Collection curator Karen M. Lee, The Private Sketchbook of George T. Morgan, America’s Silver Dollar Artist, is based on Morgan’s sketchbook. The sketchbook had lain buried in a Smithsonian vault since 1966 and may have remained forever collecting dust in a museum vault had it not been for a researcher’s curiosity, who discovered Morgan’s sketchbook some eight years ago.

The contents of Morgan’s sketchbook reveal the sculptor-engraver’s creative process over the course of nearly two decades. Lee’s book shares highlights from that creative process with readers.

Most of Morgan’s work while employed by the U.S. Mint is identified and illustrated in the book, which has an extensive and comprehensive bibliography. Central to Lee’s book are 80 pages from Morgan’s personal and professional sketchbook — the entirety of the creative journal that he carried from his native England to the United States in 1876 and continued to add to after his arrival in the United States. The British-born Morgan became an assistant engraver at the Philadelphia Mint sometime after the conclusion of the six-month trial period.

Morgan was appointed as the seventh chief engraver of the United States shortly after Charles’ E. Barber’s death on Feb. 18, 1917.

Also illustrated and discussed are many of Morgan’s medallic endeavors while in England.

Jeff Garrett, a Lexington, Ky., numismatic researcher and dealer, happened upon the sketchbook in 2004 while utilizing the NNC archives on one of his frequent visits to the museum.

Lee “took particular interest” in the find, writes Richard Doty, senior curator of numismatics at the Smithsonian, in his foreword to Lee’s book.

Morgan’s sketchbook was donated in 1966 to the National Numismatic Collection by the New York numismatic firm, Stack’s.

“The gift occasioned little notice at the time: the Stack family had long been, and still are, generous contributors to the NNC,” Doty writes in the foreword. “So Morgan’s book was carefully stored, then forgotten for more than four decades.”

Realizing the research value of the sketchbook that once belonged to Morgan, Lee tackled the task of following the coin and medal designer’s lineage and craft back to his birthplace of Bilston, England.

“My curiosity about George T. Morgan’s sketchbook was raised years ago, when I first saw it in the National Numismatic Collection,” Lee said Oct. 23. “My colleagues and I were examining one sketch in particular — the concept proposal for a $100 coin. I remember being eager to turn the pages but having to wait until we finished our discussion. I was intrigued when finally I saw the full contents of the book — it contained such a wonderful variety of subjects and images.

“At the time, I hadn’t yet discovered that Morgan began sketching in the book during his student years in Birmingham, England, or that the book was rare because of the completeness or variety of its contents. Yet it was clear this object had a story to tell and that my goal was to discover and interpret it. The Private Sketchbook of George T. Morgan is the result.

“Still it amazes and humbles me that a single object has revealed so much about the private life of a beloved public figure.”

Morgan’s proposed obverse design of Commerce for the $100 gold union was created during the depths of an economic depression in the mid-1870s. Apparently no patterns were produced from those designs. However, in the mid-2000s, his obverse design for the union was used by the private New York Mint to issue Proof silver and gold medals. The eagle reverse of the 2008 medals is from another sketch in Morgan’s sketchbook, one he did not intend for the $100 coin.

In her book, Lee traces Morgan’s life and career in England from his birth in 1845 up to and beyond the time he joined the U.S. Mint in 1876.

Morgan had attended the Birmingham School of Art in England from 1861 to 1867 before he won one of 16 scholarships awarded in 1868 to attend the prestigious National Art Training School in South Kensington, where he studied for two years.

Morgan also studied for four years under the tutelage of Leonard Charles Wyon at Britain’s Royal Mint.
Morgan’s status as a proficient medalist and engraver was elevated through his association with the Royal Academy of Arts and Art Union of London, and private commissions from the Royal Mint.

Dr. Henry R. Linderman, director of the U.S. Mint, had telegraphed his intentions of seeking a permanent assistant engraver for the U.S. Mint in a letter dated June 13, 1876, to Sir Charles William Freemantle, deputy master of the Royal Mint.

Morgan was executing private commission work for the Royal Mint at that time.

In an Aug. 22, 1876, letter to Morgan, Linderman offered Morgan a six-month trial at the Philadelphia Mint, “an arrangement distinctly different from the assistant engraver position Linderman originally wished to fill.”
“The downgrade suggests that William Barber, the Mint’s chief engraver, and his son, Charles, who also worked at the Mint, may have gotten wind of the idea, and, unwilling to share their workshop, tried to restrain the offer so it could later be nullified,” Lee writes, but also notes, “In fairness, some sources indicate the Barbers were unaware of George Morgan’s arrival.”

Morgan alerted Freemantle by letter dated Sept. 20, 1876, of his intentions to sail aboard the SS Illinois for the United States the following week to accept Linderman’s offer.

“One wonders how Morgan managed to arrive in Philadelphia on October 7 and, before the end of the year, create a polished design for a $100 gold coin, along with sketches for a trade dollar and a half dollar, and a proposal for a centenary medal,” Lee writes.

According to Lee, as Morgan was en route to Philadelphia by steamship, Linderman, apparently unaware, sent a letter dated Sept. 28, 1876, to Freemantle after not having heard from Wyon about Morgan being recommended for the assistant Mint engraver’s opening.

Illustrations of all of the original correspondence are published in Lee’s book.

Soon after his arrival, Morgan was reimbursed by Linderman for his $222.50 in travel expenses.

Linderman’s welcome contrasted sharply with Morgan’s reception from the Barbers.

“Aware that the stability of their dynasty could be jeopardized by this acclaimed and well-trained engraver, they waged a campaign to block Morgan from working in the Mint,” Lee writes. “Director Henry Linderman, claiming that there was no space, instructed Morgan to conduct his business from his boarding-house room,” Lee writes.

Morgan took up residence at a boarding house run by the widow of Adam Eckfeldt Sr., second chief coiner of the U.S. Mint, who died some two decades earlier.

Morgan immersed himself in several projects, including developing designs for a new silver half dollar, designs that would be used instead for the silver dollar that collectors know today by his surname.

During the trial period of Morgan’s employment, Linderman gave him his approval to go to the Mint and have his designs executed in model form. It represented the beginning of a long and storied career at the Mint.

Morgan’s 48-year tenure on the Mint’s engraving staff is the longest in Mint history, eclipsing William

Barber’s by a single year.

Morgan become chief engraver subsequent to the Feb. 18, 1917, death of Charles E. Barber, under appointment by President Woodrow Wilson, with the concurrence of the U.S. Senate.

More than a dollar

??Behind-the-scenes correspondence from the U.S. Mint and Britain’s Royal Mint.

??Analysis and interpretation of Morgan’s drawings.

Pre-orders for Lee’s 192-page, hardcover book are being accepted at www.whitman.com.

The book will also be available from numismatic and general booksellers nationwide. ¦