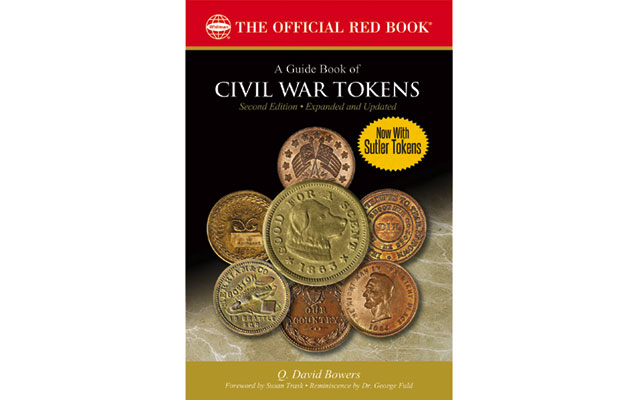 The second edition of A Guidebook of Civil War Tokens by Q. David Bowers will soon be published. 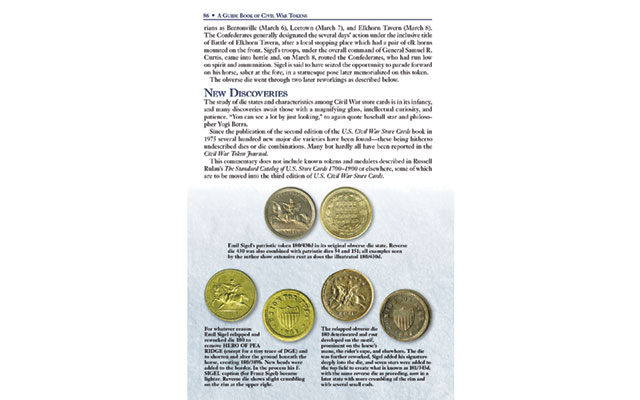 The second edition includes updated research since the first edition was published just over one year ago. 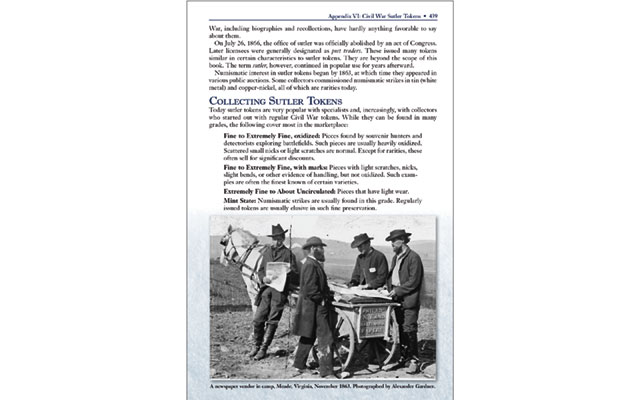 The second edition features a 50-page review of sutler tokens, those pieces issued by traveling merchants, seen here, who sold items to soldiers during the war.

Whitman Publishing is releasing an expanded, updated second edition of the award-winning Guide Book of Civil War Tokens, by Q. David Bowers. The 512-page book will debut in December 2014.

Civil War tokens were issued during the American conflict by merchants and others as a substitute for small change, which had become scarce. They became vessels of advertising and vehicles of patriotism.

The first edition of the Guide Book of Civil War Tokens debuted in August 2013 at the American Numismatic Association World’s Fair of Money, and it sold out before the end of 2013. In 2014 the book won the Token and Medal Society’s Mishler Exonumia Cataloguing Award.

The second edition updates and expands the first edition, with 64 more pages. It features a completely new 50-page illustrated appendix on sutler tokens (private issues of government-licensed contractors who typically operated camp stores in connection with traveling military regiments); hundreds of individually updated values based on the current market; new (and more) images; the latest research in this active field; and a bibliography of related books, journals, and websites.

Civil War tokens are small-cent-sized tokens, mostly of copper or brass, that were issued by private firms to serve as emergency “money” during the small-change shortage of 1862 to 1865. As the military conflict dragged on, Americans hoarded any gold, silver, and eventually even copper U.S. coins they received in change, holding the metal as a hedge against wartime economic uncertainty.

Civil War tokens, privately issued by hundreds of merchants and organizations and minted in the millions, were used as substitutes for hoarded “pennies” to make change for small purchases. Today these tokens are highly collectible, with values generally ranging from $15 for common, circulated pieces to more than $15,000 for rarities including unique tokens.

The book includes more than 2,000 full-color images, plus values in multiple grades, rarity ratings, detailed historical background, a study of how Civil War tokens were manufactured, ways to collect them, identification of unusual varieties, and information on the potential for valuable new discoveries. It covers both patriotic tokens and “store cards” (merchant advertising tokens), as well as sutler tokens (some of which used Civil War token dies) and encased postage stamps of the era. Nearly every known Civil War token die is described in both pictures and text.

The Bowers guidebook is the only full-color illustrated price guide to these collectible pieces of Americana, said Whitman publisher Dennis Tucker.

The cover price of $39.95 is about the price of a common copper token in Extremely Fine condition.

The book will be available online (including from Whitman Publishing) and from bookstores and hobby shops nationwide. Members of the ANA may borrow the book from the ANA Library for the cost of postage.