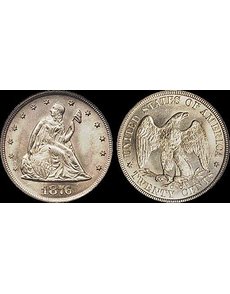 This 1876-CC Seated Liberty 20-cent piece is the key to the series but it is doubtful that many home hobbyists can afford one. But a 20-cent type collection requires only one coin — the best a collector can afford.

The Seated Liberty 20-cent coin was produced as a circulation strike for only two years, 1875 and 1876 (although production of Proof pieces continued in 1877 and 1878).

The size and design of the 20-cent coin confused the public because of the similarity to the quarter dollar, leading to the quick demise of the denomination.

The quarter dollar owes its existence to the Spanish dollar, or peso, worth 8 reales. The peso was used in commerce in the American Colonies and also for a time after the U.S. Mint began producing coins in the 1790s.

To this day, the 25-cent coin — a nondecimal denomination — is known as “two bits” because the peso was often cut into eight equal pieces, each called a “bit.”

It seems any coin similar in size to the quarter dollar is doomed. Consider the ill-fated Anthony dollar of 1979 to 1981 and 1999. Like the double dime, this small-diameter coin confused the public.

Many home hobbyists collect quarter dollars, especially since Congress has devised programs such as the 50 State Quarters, the District of Columbia and U.S. territories quarters, and America the Beautiful quarter dollars.

Perhaps that is why collectors might want to consider the short-lived but all-American 20-cent coin.

Other mintages and estimated survival rates for 20-cent circulation strikes are:

As such, the 20-cent coin is both one of the greatest rarities and bargains of numismatics.