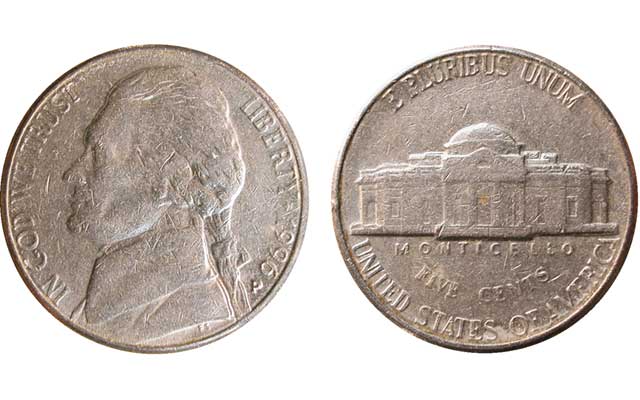 This 1996-P Jefferson 5-cent coin shows rotational machine doubling on both faces. A rotating collar may have contributed to the error. 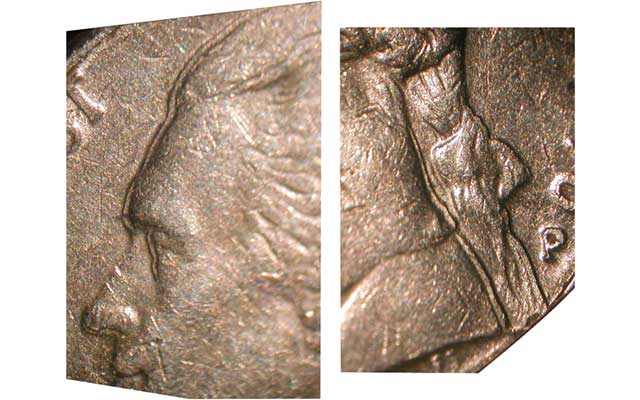 Marginal shelving is clearly evident on Jefferson’s face and the back of his neck. 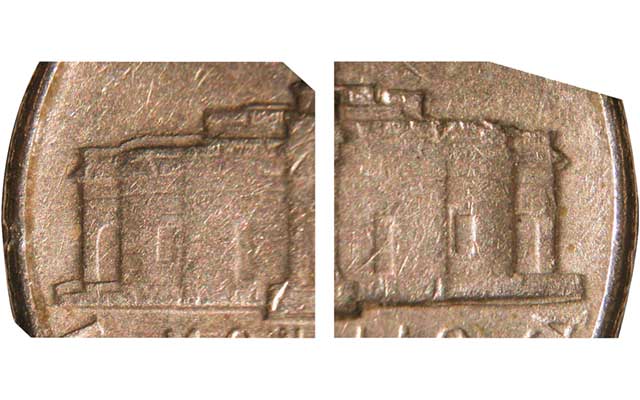 Marginal shelving affects Monticello along its left roofline and right base.

Machine doubling is typically caused by a loose die, an unstable die assembly, or a vibrating press. After the dies sink into the planchet as far as they’re going to, they fail to disengage cleanly. Secondary contact between die and coin during the early retraction phase leaves the coin with doubled or smeared design elements.

Machine doubling can be generated by both hammer and anvil die, although it’s more commonly associated with the former. The most severe examples are also produced by the hammer die. This is because the hammer die’s lateral movement is not constrained by the collar and because the coin is left behind as the hammer lifts off the surface. Machine doubling can also appear on both faces simultaneously, although it’s uncommon.

In “push doubling” the die bounces off the surface of the newly-struck coin, shifts position, and lands lightly on the newly-struck design. As a result, the edges of affected design elements show flat, marginal shelving.

In “slide doubling” the die fails to bounce and instead drags itself through the newly-struck design, smearing it and piling up relocated metal into a series of ridges.

The die’s rapid vibrations and movements can create multiple sets of closely-spaced shelves (though seldom more than three). For the same reason, die movement can occur in two or three different directions on the same face (Collectors’ Clearinghouse, March 15 and Dec. 6, 2010; June 25, 2012).

Ralph Hilkowski recently discovered a highly informative example of rotational machine doubling. Plucked from a bank roll, this 1996-P Jefferson 5-cent coin shows the error on both faces. On the obverse we see classic push doubling on Jefferson’s face and along the back of his neck. The location of the doubling indicates that the hammer die bounced up after impact, rotated slightly clockwise, and landed lightly on the newly-struck design, leaving behind diagnostic marginal shelving.

On the left side of the reverse, equally broad marginal shelving affects Monticello’s roof and the upper side of the building’s flared base. On the right side, complementary marginal shelving affects the underside of Monticello’s base and the underside of the roof overhang. This pattern indicates that the reverse die bounced off the coin’s surface, rotated counterclockwise, and fleetingly touched down on the newly-struck design.

Despite appearances, the two dies did not rotate in opposite directions. Remember that domestic coins are struck in coin rotation, where the two designs point in opposite cardinal directions. As a result, an identical twist of the die will appear to travel clockwise on one face and counterclockwise on the opposite face. The two dies that struck the 1996-P 5-cent coin actually followed the same arc of movement in vertical space.

The observed synchrony in the direction and distance traveled by the two dies requires explanation. In other cases of bifacial machine doubling, the direction of doubling is almost always different between the two faces. I don’t know of any press design that promotes coordinated die rotation. Maybe the synchronous movement was just coincidental. However, it’s possible we’re dealing with machine doubling assisted by a rotating collar.

The snugly-fitting newly-struck coin might have been carried along by a rotating collar as the dies bounced off the coin and returned to make light contact.

The idea of a rotating collar is not new. In the July/August Errorscope, William “Ed” Eubanks described a large sample (261) of 2002-P Kennedy half dollars with a rotating collar chip. This chip rotated clockwise a full 360 degrees through several changes of the obverse (anvil) and reverse (hammer) dies. In the April 1997 issue of 2Times (a specialty journal devoted to 2-cent pieces), Frank Leone described a rotating collar break in a group of six 1864 2-cent pieces that traveled through 90 arc degrees.