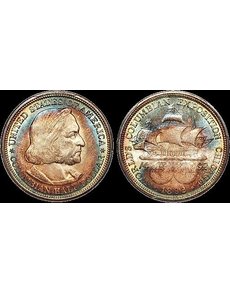 On Aug. 9 Heritage sold this 1892 World’s Columbian Exposition half dollar graded MS-67+ with a green CAC sticker for $35,250. While common in lower Mint State grades, this is one of the finest known.

As evidence of this, one can look at an 1892 World’s Columbian Exposition commemorative half dollar in a Professional Coin Grading Service Mint State 67+ holder with a green Certified Acceptance Sticker indicating quality within the grade. It brought a huge $35,250 at Heritage’s Aug. 9 auction held immediately before the American Numismatic Association World’s Fair of Money. It’s one of four PCGS MS-67+ examples of this otherwise common issue.

The 1892 World’s Columbian Exposition half dollar was the first commemorative half dollar and its large mintage of 950,000 was joined by another 1,550,405 coins dated 1893. Examples in well-circulated condition may be found for a modest premium over bullion value, and even gorgeous gem Mint State examples are relatively affordable.

Solid MS-65 examples can trade at auction for as little as $275, although colorful examples with rainbow toning may trade at the $500 to $700 level in this grade.

Basic certified MS-63 examples can trade for as low as the $50 to $60 level in online auctions. Beautifully toned representatives — such as one graded MS-63 with rich jewel colors that brought $305.50 at an Oct. 21, 2012, auction — show that when toning comes into play, conventional value levels don’t necessarily apply.

The premium for magnificently toned coins is particularly seen with Morgan dollars, such as the 1881-S coin. This is a coin that “comes nice” in that it is generally seen with thick luster, a bold strike and with generally clean surfaces. Fully brilliant examples in MS-65 might sell for as little as $130 at auction, while MS-65 CAC coins might sell at the $175 level.

Also noteworthy in Heritage’s Aug. 9 auction was a 1962 Jefferson 5-cent piece, a coin that in circulated grades is extraordinary common (it has a mintage of nearly 100 million pieces). Heritage offered one graded PCGS MS-67+ full steps — the only one in this grade — and it brought $21,150. The huge price for the condition rarity provided further evidence that the market’s appetite for top-graded rarities shows no signs of being satiated. ¦