When a coin approaches folk art: a curious 1792 half disme 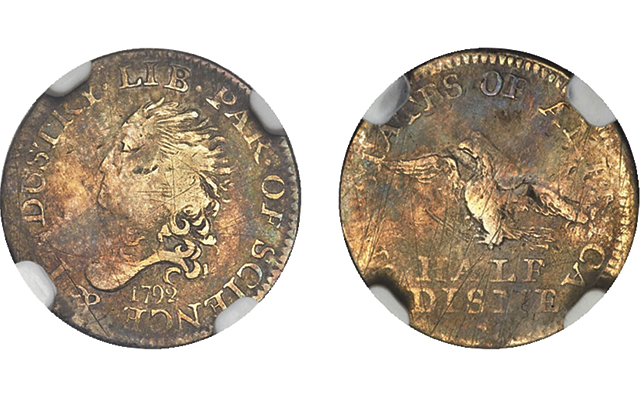 This 1792 half disme would not likely win a beauty contest, but the repaired hole has impacted Liberty’s profile, changed her character, and transforms the piece into something in the realm of folk art. It sold for a strong $18,212.50 at Heritage’s April 24, 2014, auction.

Heritage Auctions described the piece as “well-traveled” and the years haven’t been particularly kind to Liberty’s features.

Liberty already looks stern on problem-free examples of this type. But here, perhaps accountable to the fact that the coin was holed and then repaired, Liberty’s taken on a mean, almost aggressive expression. The result is rather charming, considering the problems, transforming the pattern into something closer to folk art.

Research by Len Augsburger, Joel J. Orosz and Pete Smith has confirmed that all of the known pieces were struck from the same obverse die. Estimates suggest that perhaps 300 or so survivors remain from an original mintage of between 1,500 and 2,000 pieces.

The authors discussed their research in a 2013 Coin World Guest Commentary and issued a call for Coin World readers to assist in their study. Smith shared with me at the CSNS show that this resulted in the addition of several new coins to their database.

The offered example brought $18,212.50, on April 24, 2014, with 13 separate bidders who looked past the crude repairs and perhaps also found the coin to be charming.