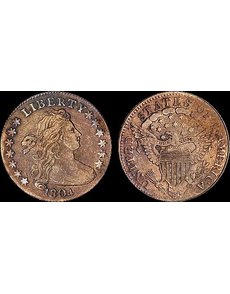 In the 1991 edition of his classic investment book, High Profits from Rare Coin Investing, Q. David Bowers wrote, “Consider coins to be a long-term investment. While individual factors vary, I suggest a period of five to 10 years to be a good objective and 10 to 20 years to be even better; the longer the time, the greater the returns have been on a historical basis.” That logic is perhaps even more true 20 years later.

The coin buying and selling landscape has changed in major ways in the past two decades. With the current democratization of information, auction results have become incredibly easy to search.

It’s much harder for the market to “forget” a coin that appeared at public auction. If a buyer is looking for a coin at auction, he or she can see what that coin — and similar coins — have sold for in the past and use that information to make smart buying decisions.

The market’s memory is longer and more accessible than ever. As Bowers wrote in 1991, a factor supporting coins as a solid investment is that coin information is readily available.

“Generally, coins are easy to identify and classify. Mintage figures, sales records, and price guides are available to help you with your investment decisions — aiding you in the same way that earnings records, dividend information, industry projections, and other information is of use in the stock market,” he wrote.

Mystique has long accompanied coins that are from old time collections. When offered for sale, they’re presented as rare and fresh buying opportunities.

Frequent and repeat appearances of the same coin can create an illusion that a coin is more common than it actually is. John Kraljevich noted this in his Sept. 24 “Colonial Americana” column where he defined “market velocity” — how often a piece becomes available for purchase. A coin can be rare, yet trade relatively frequently.

When one takes inflation into account, even modest price appreciation may not be as impressive as it appears. Take for example a 1932 Picasso painting “Still Life with Tulips” that realized $28.6 million at Christie’s in 2000. Re-offered two weeks ago in New York at Sotheby’s, it sold for $41.5 million. As Souren Melikian, writing in the New York Times, pointed out, once charges are deducted for both buyer and seller, combined with storage costs and the eroded buying power of the dollar, the return is much less impressive. Further, the prior sale set a benchmark that established relative value.

When people know what an object last sold for, they have to convince themselves that it may be worth more the second time around. ¦