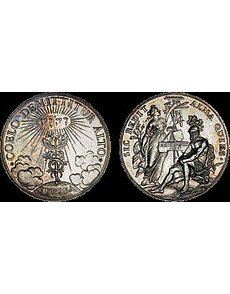 This 1697 Treaty of Ryswick medal falls within the parameters of C. Wyllys Betts’ American Colonial History as Illustrated by Contemporary Medals, but it isn’t listed. It sells for a fraction of what similar listed medals bring.

We coin folk tend to be pretty by-the-book people. The very nature of collecting is about creating order from chaos, whether you collect quarter dollars by date from pocket change or early U.S. Mint medals by die state. Why, then, is being unlisted sometimes good but sometimes bad?

Pretty much every specialty has some kind of standard reference, some book or listing that helps collectors corral the chaos. For Connecticut coppers, it’s Henry Miller’s 1920 The State Coinage of Connecticut. For early American medals, every collector clutches his or her copy of the 1894 classic American Colonial History as Illustrated by Contemporary Medals.

When a new variety of Connecticut copper pops up, it’s an instant rarity coveted by hundreds of serious collectors. For instance, the 1787 Miller 49.2-Z.26 variety was discovered in 1986 by Steve Tanenbaum. It was never listed by Miller. That piece, which would be worth maybe $30 to $40 if struck by a listed set of dies, brought $63,250 in the January 2012 Stack’s Bowers Galleries’ auction. The fact that it was unlisted clearly didn’t hurt it at all.

When a variety of medal appears that wasn’t listed in Betts, but should have been if C. Wyllys Betts knew about it, it typically sells for a fraction of what a similar listed medal would bring. Throughout the series are examples of some medals of a particular type being listed, some not: medals commemorating peace treaties that had an impact on early America, medals struck to mark Adm. George Rodney’s capture of Sint Eustatius, merit medals given to British regiments and more.

The unlisted medals are typically rarer than those listed, and their appeal and interest is the same. Since they’re not properly a “Betts medal,” collectors ignore them.

Nearly any die variety of a state copper series fits the first scenario, but many things meet the second: American reference Conder or evasion tokens that aren’t listed in Walter Breen’s Complete Encyclopedia of U.S. and Colonial Coins or A Guide Book of United States Coins, paper money or fiscal paper not listed in Eric Newman’s The Early Paper Money of America, countermarks not listed in Gregory Brunk’s American and Canadian Countermarked Coins.

If you collect an area that consigns rare and obscure pieces to the sidelines because they’re unlisted, color outside the lines.

Specialties that put no premium on “unlisted” items share the common thread of having a primary reference that presents the opinion of one person, the author, as the standard for defining what the particular field includes.

Do your own research and draw your own conclusions, and maybe write your own reference, too.