What would a dollar buy? 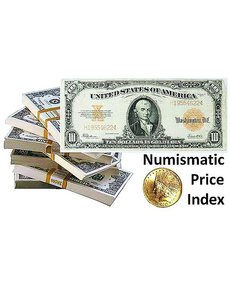 Do you recall your parents or grandparents remarking what a dollar would buy in their day?

You can get such figures from the Bureau of Labor Statistics, which calculates the Consumer Price Index, a “market basket” of goods that the typical U.S. household purchases at any given time. That basket would include such items as fuel, food, apparel, transportation, medical services, shelter, utilities and so on.

I have a better gauge for hobbyists, the NPI, or “Numismatic Price Index,” which you can use to assess the value of precious metals.

To figure the NPI, choose a year such as 1878, when the first Morgan dollar was minted. Figure what that dollar would have purchased in a market basket then, using the CPI for that year to help assess current value. Then figure the melt value of the silver as a measure of inflation and the retail price of an Uncirculated type coin as a measure of investment.

Visit these nifty sites to do calculations:

? “Measuring Worth,” located at www.measuringworth.com, to access the CPI for any given year

? “Coin Values,” located at www.coinvaluesonline.com, to access the retail price of a type coin

Using the CPI for 1878, the value of a new Morgan dollar then would equal about $22.50 in purchasing power today. With silver at $34.80 per ounce (on March 2), a Morgan dollar’s melt value would equal $26.92. A common Morgan dollar type coin in low Mint State costs about $50 to $60. Thus, a Morgan silver dollar since inception has retained more than its consumer value at melt, and its investment value in Uncirculated condition has doubled the original purchasing power.

You can use the NPI to assess which metal is overvalued or, conversely, the better hedge against inflation.

Let’s test that utilizing the 1922 CPI, because the Series 1922 $10 gold certificate (Friedberg No. 1173) remains one of our most beautiful notes, with a golden Roman numeral X, serial number and emblem on the face and an orange sunburst on the back.

A common 1922 Peace dollar would buy $12.80 in today’s market. Its melt value March 2 was approaching $27 and its type coin value ranging from $40 to $50 in low Mint State. Thus, its purchasing power at melt is more than double its original value, and triple in low Mint State.

Now compare the NPI for silver and gold from 1922 to present day. You can argue that silver should be about $60 per ounce at melt (or five times its value) according to the “gold standard.” Or you can claim that gold is a better hedge against inflation, at least for now.