What would a 2015 Lincoln, Doubled Die cent look like? 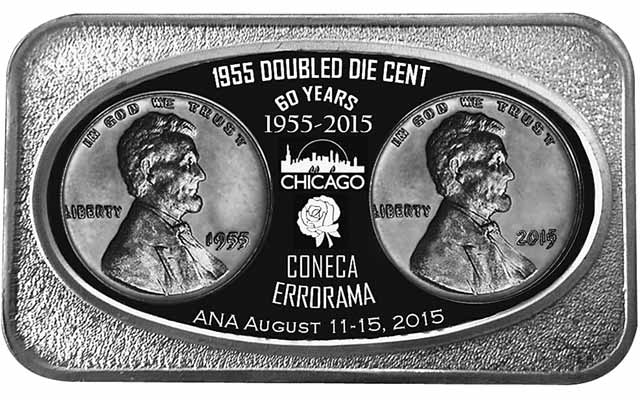 A 2015 silver bar from the Combined Organization of Error Collectors of America marks the 60th anniversary of the 1955 Lincoln, Double Die cent by imagining a similar error on a 2015 cent.

The Combined Organizations of Numismatic Error Collectors of America is celebrating the 60th anniversary of the 1955 Lincoln, Doubled Die cent with a one-ounce silver bar.

The bar features a 1955 Doubled Die cent to the left and a view of what a doubled die error would look like on a 2015 Lincoln cent. In the center is an image of the Chicago skyline and a rose symbolizing that the American Numismatic Association’s World’s Fair of Money will be held at the Chicago suburb of Rosemont.

The bar will first be distributed at this convention.

CONECA’s medals program (which now includes bars) stemmed from the 2003 CONECA Board of Directors’ efforts to celebrate its anniversaries and other events while raising funds for the club, with the specific purpose of preventing an increase in membership dues.

The bronze bar will feature a plain back and the enameled silver versions will be struck with a reverse reading ONE OUNCE .999 FINE SILVER.

A more ornate reverse with the same legend but two shocks of wheat is planned for the standard and cancelled die silver versions.

All of the silver bars will be serial numbered with the lowest numbers distributed first.

Bars will be available to members and nonmembers alike, but members receive special pricing.

The cancelled die silver bar is $75 to members and $110 to non-members.

Non-members may join for $25 dues to receive the member price.

Postage is $2.75 for the first bar and $1 each for additional bars. International buyers should check with program coordinator, James Motley via email for postage costs.

There will be a limit of one bar per person on the enameled, gold-select bars and the cancelled die bars until Aug. 31, to give all members a chance to order.

Checks or money orders for the bars and/or membership dues should be made out to CONECA and mailed to CONECA Medals Offer, c/o James Motley, P.O. Box 1471, Highland, MI 48357-1471.

CONECA will have a club table at the ANA World’s Fair Of Money in Chicago Aug. 11 to 15 where the bars may be picked up by those who desire that option.

To see further details, or make payment via PayPal, visit a special page on the CONECA website.