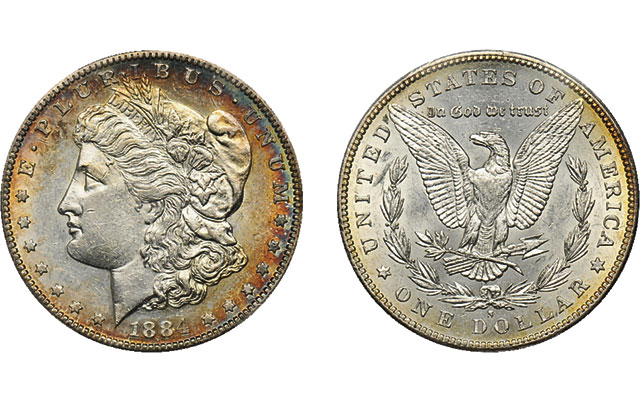 This is one of those coins in the auction that graded About Uncirculated:

The 1884-S Morgan dollar is an unusual issue in the series. It’s a relatively common coin through Extremely Fine 45, but becomes tough in About Uncirculated grades and the price between an EF-45 and an AU-50 coin doubles. Seeing that a base-level Mint State 60 example of this date approaches $10,000 places enormous pressure on quality AU-58 examples like the one offered at Scotsman Auction Co.'s Oct. 17, 2014, sale.

The About Uncirculated grade has different levels of quality within that grade, which is typically segregated into the AU-50, AU-53, AU-55 and AU-58 grade levels. The latter is often referred to in shorthand as “borderline Uncirculated.”

The silver dollar in the auction is particularly handsome, with just a bit of color at the edges, so much so that the firm called it “devastatingly attractive” and differentiated it from many examples of this date at the About Uncirculated level that have been cleaned to appear Mint State. This piece, graded AU-58 by Professional Coin Grading Service, sold for $2,760.