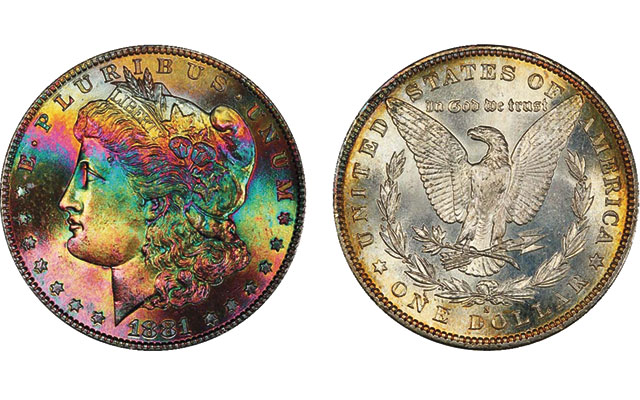 Few coin series have as broad collector interest as Morgan silver dollars. Like fans of any long-running series with many date and Mint mark combinations, collectors often specialize while others just want a single example for type purposes. One area that experiences huge demand and often crazy auction results can be found in toned Morgan dollars. Especially on high-grade Mint State coins, some Morgan dollars have spectacular rainbow toning and when these coins are offered at auction, it’s anyone’s guess as to what they’ll bring. Here are three from Bob Simpson’s Sunnywood Collection that soared at Legend’s Oct. 2 Regency auction in Las Vegas, Nev:

The 1881-S Morgan dollar is the quintessential type dollar as it’s widely available in high grades up to and including Mint State 67. In MS-68 it’s scarce, and while a handsome untoned example in this grade might cost $5,000, or so, at auction, when the example is magnificently toned, all bets are off.

On Oct. 2, one graded by Professional Coin Grading Service MS-68+ with a green Certified Acceptance Corp. sticker indicating quality within the grade brought $45,825; the presale estimate of $25,000 to $27,500 proved irrelevant. The magnificent dollar was described as follows: “Considered by some enthusiasts to be the ultimate finest toned Morgan known to the collecting community, this paradigm of perfection features rich vibrant banded rainbow toning over essentially flawless and highly lustrous surfaces.” If that wasn’t enough, it was the star of an ANACS marketing campaign as it was once housed in an ANACS MS-68 holder, and is used by PCGS in its marketing, too.