What do I do with all these coins? Buy this book 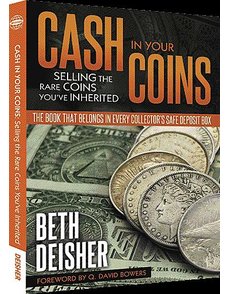 A few months after becoming editor of Coin World in 1985, I answered my phone at work one morning and heard a woman’s voice proclaiming, almost in a demanding voice: “I need to know what to do with these coins.”

Occasionally in the editorial offices we would receive phone calls from people mistakenly believing Coin World to be the name of a coin shop, so we had a standard reply suggesting that would-be buyers or sellers contact our advertisers.

Before I could finish, “Coin World is a weekly publication. We do not buy or sell, …” she cut me off.

“I KNOW Coin World is a publication,” she said. “And you’re the editor, right?”

A little stunned, and certainly intrigued, I acknowledged that, yes, I was the editor. And then asked, “So how can I help you?”

“Well, I certainly need help,” she said. But this time her voice was mellow, almost apologetic. “You probably think I’m crazy. But I just didn’t know who else to call.” And then she began to share her story.

Her husband of 28 years had died quite suddenly about a year earlier. He had been a coin collector and started subscribing to Coin World in 1962. He read every issue the day it arrived in his mailbox and would never let her discard a single issue. They had had a modest, but good life. He had worked for the same company all of his working years. She had worked two jobs in recent years to help pay off their mortgage.

After her husband died, she had found some silver dollars and some Wheat cents in a small safe in their home and assumed that was his collection. She had never been interested in coins and had never really talked about coins with him. Within the past month payment due notices for safety deposit boxes addressed to her husband had arrived in the mail. There were seven in total, all from banks within an hour’s drive of their home. She began to search her house and to her surprise found an envelope containing seven keys identified by bank. Visits to each bank revealed safety deposit boxes filled with gold coins.

“I don’t know a thing about coins. I don’t know who to talk to. In fact, I’m scared to tell anybody that I even have these gold coins!” she admitted.

The world technologically was much different then. Professional third-party grading services were in their infancy. The Internet was just a few years old and creation of the World Wide Web was a few years away. The most readily available tool was the venerable “Red Book,” which I suggested she use to identify the coins and create an inventory list; then use Coin World Trends to estimate values. Several years later the coins were sold at auction and she received enough for a very comfortable retirement.

While not everyone who has reached out to me has learned the coins they have inherited are of great value, their stories were remarkably similar. They knew very little about the coins and they were apprehensive about selling them, fearing that they would be “taken” by buyers.

Ironically, as more information becomes available via books and the Web, the more isolated and secretive many collectors tend to be, and the pattern repeats. They enjoy collecting and don’t want to think about the “what ifs” of life.

I wrote Cash in Your Coins: Selling the Rare Coins You’ve Inherited especially for those who have inherited a collection or have been the recipient of some numismatic collectibles. Hopefully it will help them to confidently make good decisions and reap the benefits their loved ones intended. (The book is available at www.whitman.com.)

Beth Deisher was editor of Coin World from 1985 to April 2012. She received the American Numismatic Association’s Farran Zerbe Memorial Award in 2010.