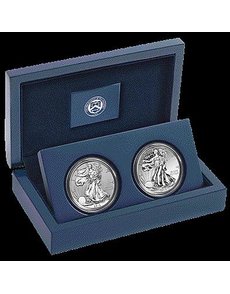 Tom Jurkowsky, director of the U.S. Mint’s Office of Corporate Communications, said Oct. 31 the difference in the closing unaudited sales total for June 6 and the figure released Oct. 25 was the result of customer returns and order cancellations. The cancellations were the combined result of customers canceling orders before shipment from the Mint and orders canceled by the Mint because customer credit cards registered for payment had expired.

The sets are generally selling for premiums in the secondary market.

As of 10:30 a.m. Eastern Time Oct. 28, American Precious Metals Exchange (www.apmex.com) was offering the two-coin sets in the Mint-issued packaging at $174.99 each with payment by check or wire transfer, for one to four sets, with per-set discounts for higher quantities. The price per set for one to four sets, payment by credit card, was $180.24.

Two-coin sets — with the Enhanced Uncirculated coin graded Mint State 70 by Professional Coin Grading Service and the Reverse Proof coin graded PCGS Proof 70 — were being offered by APMEX for $299.99 if paid for by check or wire, and for $308.99 if by credit card.

Numerous sets are available on eBay through auctions or with Buy It Now prices. Sellers were offering the sets both certified and in U.S. Mint packaging as issued.

Other sets offered on eBay were for certified two-coin sets graded by PCGS or Numismatic Guaranty Corp. Sets are being offered in Mint State 70/Proof 70 and Mint State 69/Proof 69 options, including pieces with First Strike and Early Release certifications (indicating that they were among the first sets delivered to their original buyers by the Mint).

The Enhanced Uncirculated 2013-W American Eagle silver dollar has multiple finishes on different elements of its design, resulting in a distinct look for a coin struck by the U.S. Mint.

The fields on the Enhanced Uncirculated coin’s obverse and reverse have a light frosted finish.

Each side also has two other finishes.

On the Reverse Proof 2013-W American Eagle silver dollar in the set, elements bear finishes opposite those of a regular Proof coin. A regular Proof coin’s frosted devices contrast with polished, mirrored fields.