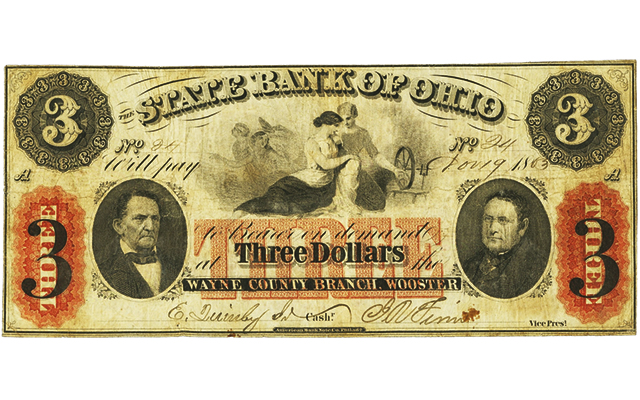 This uniface 1863 $3 obsolete note issued by the State Bank of Ohio, Wayne County Branch, in Wooster, sold for $3,525, which includes the buyer's fee. The note is formerly from the Wendell Wolka Collection.

Well-known writer, researcher and speaker Wendell Wolka has been collecting paper for more than 50 years. He writes the monthly Coin World column “Collecting Paper” and admits to having a “terminal case of collecting.” He offers advice to collectors about how to assemble a collection and how to know when it is complete.

CW: How did you know your collection was as complete as you wanted? In other words, did you set goals?

WW: “When collecting something as massive as Ohio (in theory ‘complete’ is about 7,000 different notes and scrip) I decided that representative examples from each issuer would suffice, and even then, I never came close to being complete. I tried for notes from all 41 branches of the State Bank of Ohio and I believe I managed that.

CW: Any advice you can offer to collectors who are still undecided about how to pursue a collection of obsoletes?

WW: “Don’t think about collecting Indiana — terrible state; very boring ... kidding, kidding. Seriously, I have lots of advice based on collecting these for nearly 50 years.

“Try to narrow your focus; collecting an entire state is usually a recipe for frustration.

“While condition is important, great rarities will always sell. Never sell rarity short. As a collector, being able to do research will help the cause when you decide to sell.

“People like to know what they’re buying, particularly in the uncharted waters of obsolete paper money. I have sold a number of collections over the years, ranging from obsoletes to Canadian chartered bank notes, to classic French and French colonial notes, to national bank notes, and rarity has never let me down.

“Read everything you can before you fire up your checkbook or credit card. Unlike coins, there is still a lot of information to be discovered on obsoletes and they who have knowledge still have a definite advantage over those who do not in terms of knowing what the true rarities are.”