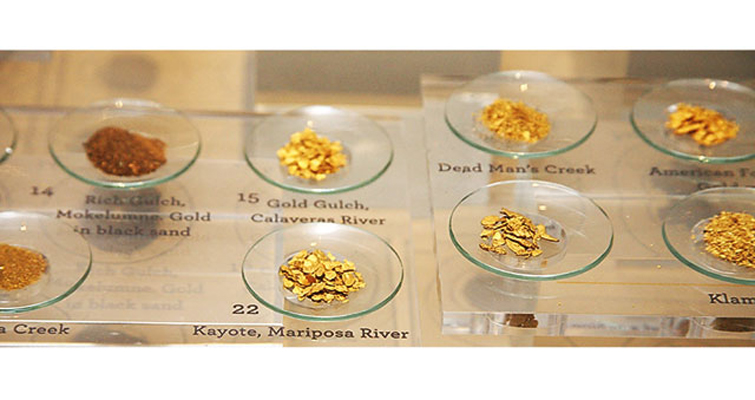 Gold dust on display at the Wells Fargo Museum in San Francisco before the Jan. 27 robbery. These items were not harmed during the robbery and are safe, according to a Wells Fargo spokesman.c

Officials say they will reopen the Wells Fargo History Museum in downtown San Francisco as soon as possible once repairs are completed to resolve damage incurred during a Jan. 27 theft of 19th century gold nuggets from the museum.

“We are just beginning the process of evaluating the damage and calculating how to fix it,” according to a Wells Fargo media spokesman.

Since the grand opening of the remodeled museum in April 2014 in San Francisco, it has recorded about 5,000 visitors per month. The 11 Wells Fargo History Museums combined get almost 600,000 visitors annually, according to a Wells Fargo spokesman.

Around 2:30 a.m. Jan. 27, 2015, three thieves used a stolen Chevy Suburban to drive through the glass revolving doors of the museum. One of the thieves held a security guard at gunpoint, while the other two thieves grabbed 4 to 10 ounces of gold from a display. The security guard was not injured.

The thieves escaped in a four-door sedan driven by an accomplice. All three thieves wore ski masks, hoodies and jeans, according to a Jan. 27, story posted on the San Francisco Chronicle website.

The museum is located on the original site of the city’s Wells Fargo Bank in 1852. The museum is often visited by schoolchildren and tourists. In addition to the gold nuggets, the museum also displays two restored stagecoaches, a working telegraph and other California Gold Rush-era items.

San Francisco has been experiencing a string of crash-and-grab robberies in the past three months.

On Jan. 19, 2015, two men rammed a vehicle into a Chanel boutique and the Prada store in Union Square in San Francisco and stole a number of upscale designer handbags.

On Nov. 26, 2014, thieves backed a U-Haul van into the front of a Patagonia store near San Francisco’s Fisherman’s Wharf and made off with merchandise from the high-end outdoor clothing retailer.