Week at ‘coin camp’ brings friends in the hobby together 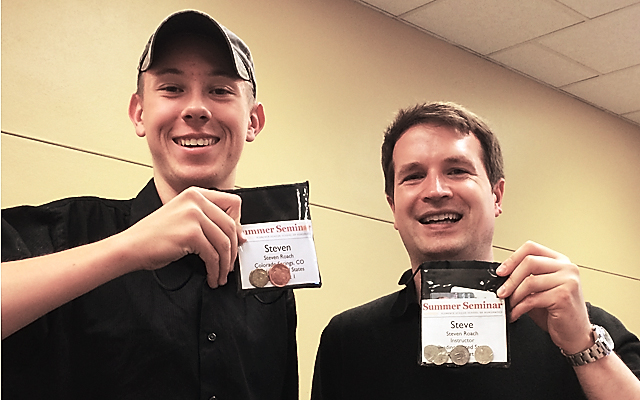 Each day at ANA’s Summer Seminar is filled with surprises! Here I am with Steven Roach, a Colorado Springs student and ANA volunteer.

The American Numismatic Association Summer Seminar has long been a treasured week for me.

It’s been 20 years since I first attended in 1994 as a young numismatist where I took the “Cherrypickers” die variety course with J.T. Stanton and Rich Schemmer. Thanks to the generosity of the ANA and other groups including the Michigan State Numismatic Society, I was able to attend for the next five years where I made connections that became lifelong friends.

In fact, I doubt that I’d be involved with numismatics today if not for Summer Seminar, or “coin camp” as it’s often referred to in shorthand.

Thankfully, I still attend Summer Seminar, and now I get to help teach and help collectors learn how to maximize their involvement with our hobby and build their collecting skill set.

This year I taught “Introduction to Coin Grading” with two top graders: Don Bonser and Matt Kleinsteuber who both have a rare skill set: they have an encyclopedic knowledge of coins and can explain the often complex world of coin grading in plain language.

Beyond their incredible skills, they’re both great people.

Each trip to Summer Seminar is a different and unique experience, shaped in large part by the people I get to meet and friends I get to reconnect with.

For example, the rumors I heard swirling around ANA headquarters are true: there is another Steven Roach active in our hobby. Steven is a Colorado Springs, Colo., student and active ANA volunteer. He’s also a great coin grader, as he showed in our coin grading class.

No, we’re not related.

If you’re on the fence about Summer Seminar, give it a try. It has the potential to change your life.