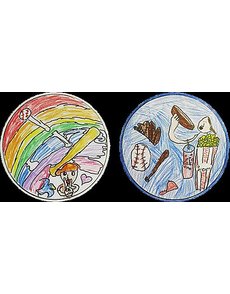 The 6 to 10 years of age category included among the 177 design submissions first-grader Davis’ “Crackle Goes the Ball” contribution, above left, and third-grader Katie’s “Baseball Excitement,”.

All images courtesy of Challenge.gov and United States Mint. 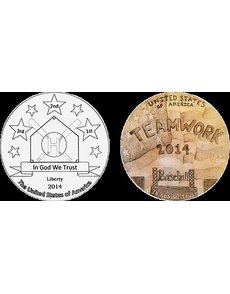 Forty-one designs were submitted in the 11 to 13 years of age category. Among the submissions were “The Star Run to Home,” above left, and “Teamwork in Baseball,” above right.

All images courtesy of Challenge.gov and United States Mint.

The public has until 12 a.m. Eastern Time July 30 to vote for designs submitted in three age categories for the U.S. Mint’s Kids’ Baseball Coin Design Challenge.

The top vote-getters are to be announced at noon EDT Aug. 16.

The design challenge for youths ages 13 and under is a parallel contest to the Baseball Coin Design Competition for those age 14 and older. The older competition participants submitted proposed designs for the common concave obverse for the 2014 National Baseball Hall of Fame gold $5 half eagle, silver dollar and copper-nickel clad half dollar.

Votes can still be cast for the kid’s contest for each of the 225 designs submitted between noon EDT April 11 and 5 p.m. EDT June 28. Votes should be cast at http://kidsbatterup.challenge.gov/submissions.

The design receiving the most public votes in each age category will be considered the overall grand prize winner for that age category.

Four runners-up in each of the three age categories will each receive a Proof 2014 National Baseball Hall of Fame copper-nickel clad half dollar.

The design submissions for the children’s contest were premised on the theme “What’s Great About Baseball.”

Submissions could be created in any medium — pencil, pen, markers, paint or design software.

From Aug. 1 to Aug. 9, the Mint will conduct an internal review of the designs in preparation for the announcement of the winners, according to Tom Jurkowsky, director of the Mint’s Office of Public Affairs.

That review will include checking that all documentation has been properly submitted according to the contest rules, including signed parental release forms, Jurkowsky said.

Grand prize winners and runners-up will be announced at noon EDT Aug. 16. ¦