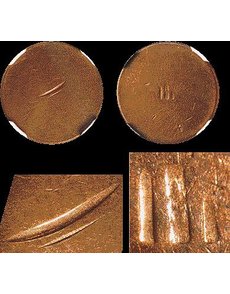 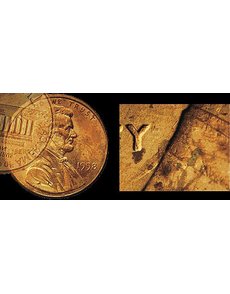 A weak, tilted, and horizontally misaligned die clash can be seen to the left of Lincoln’s bust on this 1998 cent. The 60 percent misalignment is the current record-holder among the growing roster of radically misaligned and tilted die clashes known among Lincoln cents from the last decade of the 20th century.

The Feb. 1, 2010, “Collectors’ Clearinghouse” column featured an undated dime that was weakly struck by a hammer (obverse) die that was both horizontally and vertically misaligned. The horizontal misalignment amounted to 50 percent while the extent of die tilt was estimated at about 15 degrees.

At the time, I thought this was likely to remain a unique error. However, a nearly identical error — this time in the form of a copper-alloy (pre-1983) cent — appeared as Lot 45 in the January 2012 auction Catalog No. 49 issued by Jim’s Coins (www.jimscoins.net).

As shown in the accompanying photos, the hammer (obverse) die exhibits a horizontal misalignment of 50 percent. The only portion of the obverse die to leave an impression was the rim gutter. The stronger of the two sunken, curved impressions represents the medial wall of the rim gutter.

The reverse design consists of the middle two columns and middle three bays of the Lincoln Memorial along with Lincoln’s statue.

Setting aside the challenges of determining whether any weak strike is an escapee from a test run, one wonders why any test would involve a die so horribly out of position.

Ultimately, it is impossible to authenticate a strike this weak and incomplete. While the planchet is genuine, there’s always the possibility that someone administered a light whack with fake dies. However, its “separated at birth” resemblance to the earlier-reported dime (a coin whose authenticity is beyond dispute) leaves me reasonably confident that this is a genuine Mint product.

I have never seen a horizontal misalignment greater than 50 percent on any coin, domestic or foreign. Is this, then, the upper limit for modern presses? Perhaps.

However, a second line of evidence suggests that this limit can be surpassed. The evidence comes in the form of weak, tilted, and horizontally misaligned die clashes found on Lincoln cents dating from 1991 to 2000.

More than two dozen of these unusual die clashes are cataloged on www.maddieclashes.com. While the scale of the misalignment varies markedly, most exceed 20 percent, with a considerable number in the 30 to 40 percent range. However, one specimen, discovered by Robert Piazza and cataloged as MDC-1c-1998-02, shows a horizontal misalignment of around 60 percent at the time of the clash (see photos).

The curved, raised line behind Lincoln’s bust is an impression of the edge of the field portion of the die. Faint incuse letter traces can be seen along the internal (concave) margin of the ridge. Robert (“BJ”) Neff, who took the photographs and generated the overlay, has identified the letter traces as the er of america.

The relevance of these clashes to actual coins struck by horizontally misaligned dies is unclear.

No cents actually struck with this kind of misalignment have been reported from this time period. I have previously speculated that these unusual clashes took place during installation, rather than during a press run (July 12, 2010, “Collector’s Clearinghouse”).

Lateral movement of the die assembly may be different (and more tightly constrained) during a press run.

Large lateral shifts would necessarily involve movement of the entire die assembly. The recess that houses the die wouldn’t accommodate such large shifts. And even if enough space did open up to permit misalignments of this magnitude, the hammer die would assuredly fall out.