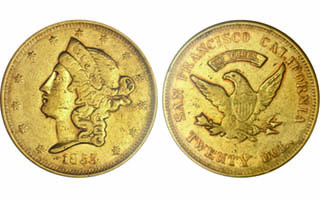 This 1855 Wass, Molitor & Co. gold $20 coin has been known to collectors for more than a century, but it was only recently identified as a previously unknown die marriage (a new pairing of a known obverse and a known reverse).

The coin bears the obverse used for one known variety and the reverse found on another known variety. The combination of these two dies make for a new die marriage or die variety that had not been previously identified.

The newly identified coin is believed to be unique, according to Heritage Auctions, which will offer the coin at auction during the April 23 to 26 Central States Numismatic Society convention in Illinois.

Pioneer gold coins (also called territorial gold) are privately issued pieces produced in gold mining regions that were distinct from federal Mint facilities, in the period from the 1830s to the 1860s. Wass, Molitor & Co. was a San Francisco firm operating from 1852 to 1855.

“The 1855 Wass, Molitor & Co. $20 gold with the Large Head obverse is one of the most elusive issues in the Territorial gold series,” said Greg Rohan, president of Heritage Auctions (Wass, Molitor $20 coins are also known with a Small Head portrait of Liberty). “This coin, from the celebrated Riverboat Collection, has recently been examined by several expert numismatists and some exciting new findings have come to light.”

According to Heritage: “Until now it was believed that all four surviving examples of this Large Head variety shared the same obverse and reverse. Careful study of the images of the Riverboat coin on the Heritage website by numismatic researcher Wayne Burt indicated otherwise. Further investigation by Burt, Saul Teichman, Stuart Levine, and Heritage cataloger David Stone revealed that the Riverboat specimen features the same Large Head obverse as the K-8 coins, but the reverse exhibits the design used on the Wass, Molitor Small Head $20, K-7. Information from bibliophile Dan Hamelberg proved essential in this research.”

The K-7 and K-8 references refer to Kagin numbers. Pioneer gold coins are cataloged in Donald Kagin’s standard reference, Private Gold Coins and Patterns of the United States, a book published in 1981. Kagin assigned individual catalog numbers to each die marriage that had been identified as of 1981.

Rohan said that “the recent study indicates the coin is almost certainly unique.”

The 1855 Wass, Molitor & Co. $20 pieces were originally produced to provide much-needed circulating coinage during a period when the San Francisco Mint found it impossible to produce gold coins because of a shortage of parting acids, used to separate silver from the gold ore.

According to Heritage: “Both Large and Small Head varieties were struck in large numbers. The coins were well-received by the public and circulated widely for a time, but the great majority of the coins were turned in to the San Francisco Mint and melted when that facility resumed gold coinage on a large scale. Like most other pioneer gold issues, the Wass, Molitor $20 pieces were rarely encountered as early as 1860.”

The Riverboat specimen is not a newly surfaced piece, though its uniqueness has only just been discovered. It was probably the first Wass, Molitor, Large Head $20 coin to appear at auction, in a Chapman sale in 1896, according to Heritage. “It was definitely the last example to be publicly offered when it appeared in Stack’s Amon G. Carter, Jr. Family Collection in 1984, more than 30 years ago,” a Heritage press release states.

Heritage’s Stone commented: “There has not been much time to study the new variety, since it was just discovered. Edgar Adams did not list the 1855 Wass, Molitor & Co. $20 gold Large Head obverse variety (K-8) in his Private Gold Coinage of California, but he did know about H.O. Granberg’s off-metal pattern of the Large Head design, K-3, which features the reverse with the eagle’s wing pointing to F in FRANCISCO, as it does on the K-8 design. Adams did know about the Small Head design (K-7, wingtip pointing to R in FRANCISCO) and listed it as his number 51. Since Adams did not know about the Large Head variety in gold, early collectors were not looking for it. The Large Head coins were offered rarely and, except for the present coin, they were either stolen or included in institutional collections by the time the modern era of research started on the Territorial issues.

“It is only when great collections, like the Riverboat Collection, come on the market that numismatists have a chance to compare different varieties and study these extremely rare coins. This coin is the only Wass, Molitor Large Head $20 to be offered since Donald Kagin published Private Gold Coins and Patterns of the United States, and it has only been offered once since that reference was published, at the Carter sale in 1984. Even images of the different coins are extremely difficult to track down, as we learned in the study. As a result, numismatists did not have a chance to study these coins, and the new variety was overlooked until now.”

The coin in the Heritage auction is graded About Uncirculated 53 by Numismatic Guaranty Corp.

For more information about the coin and the CSNS auction in Schaumburg, Ill., visit the Heritage website, www.ha.com.