Washington medals share same obverse but not a mule error 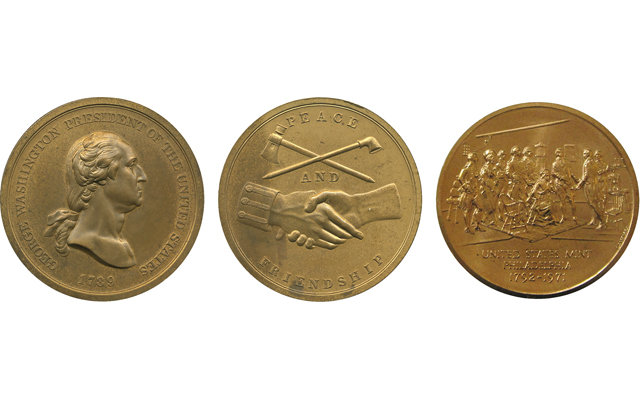 The George Washington medal obverse was paired with two reverses — the Peace and Friendship design, and the second based on the painting Inspecting the First Coins.

Several years ago I ordered and received the small version of the 1789 George Washington Peace and Friendship medal. When I received the medal, it didn’t have the reverse I expected. It had the United States Mint Philadelphia 1792 – 1971 reverse.

Sometime later, I saw one I had originally ordered and reordered it (with the Peace and Friendship reverse) and this time received it. I’ve made contacts as to if the first one was a mule, or did they actually use the same G. Washington 1789 obverse on several different medals. If it is a mule, what is its value and who collects them?

What you are describing are two different intentionally produced medals; neither is a mule.

A mule is a coin, medal or token struck with dies not intended to be paired together. U.S. Mint offered both medals, bearing the same obverse design but different reverses.

The obverse of both medals depicts a portrait of George Washington originally designed by French engraver Pierre Simon Duvivier.

The Peace and Friendship reverse, which appears on many 19th century Indian peace medals from the U.S. Mint, is the work of U.S. Mint Assistant Engraver John Reich. The reverse depicts two clasped hands, above which appear, crossed, a tomahawk and a peace pipe. That version of the medal, struck in bronze, is still available from the Mint.

Collector basics: What is a mule error coin and what are the most famous examples?

The second medal, which also bears the Washington obverse but a different reverse, is no longer for sale from the Mint.

This design, with different inscription, was also used for the obverse of the medal issued in 1993 for the 1992 Bicentennial of the U.S. Mint. The bicentennial medal is also no longer available, but examples do show up on eBay occasionally.