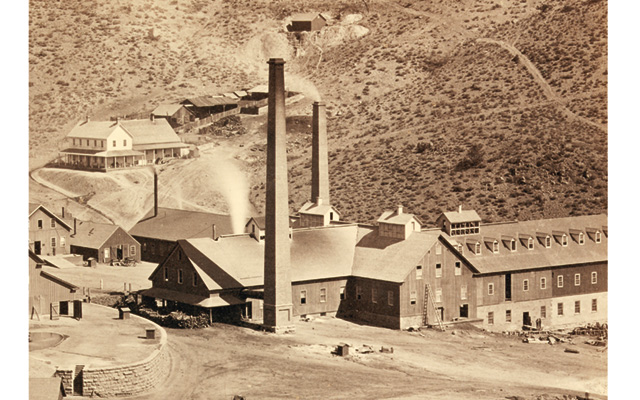 The processing mill for the Gould & Curry mine, Virginia City, Nev., in the 1860s. Gold and silver ingots were shipped to San Francisco to be coined.

Today, silver and gold coins from the Carson City Mint have a magnetic attraction to collectors. Generally, the mintages were small and today most Carson City Mint coins are rare. Morgan silver dollars are the exception to the rule. While 1879-CC and 1893-CC dollars are expensive and the 1889-CC Morgan dollar is even more so, most dates are quite affordable — in the hundreds of dollars in Mint State.

The story begins in the late 1850s in the western section of Nevada, an area with few inhabitants and sparsely vegetated high prairie and mountain landscapes. Abram (Abraham) Curry, who came from New York, purchased a tract of land on which he established Carson City in 1858.

In 1859 a band of travelers located gold- and silver-bearing black sand about 15 miles away from the new community. Henry Comstock aggressively sought and gained control of the beginning operation, property that became known as the Comstock Lode.

Word of the bonanza spread westward to California, where many fortune-seekers who had come for the Gold Rush were now employed on farms, in stores, and in other less adventurous pursuits. The Comstock Lode beckoned, and in the early 1860s the district, centered in Virginia City, about 14 miles from Carson, was teeming with laborers, most of whom worked in large underground mining operations.

Largest of all of the companies was the sprawling Gould & Curry facility, in which Abram Curry was a partner. On March 2, 1861, Nevada was granted territorial status, and on Oct. 31, 1864, it became a state.

Most gold and silver from Virginia City was shipped by rail to San Francisco, the leading financial center of the West Coast. The San Francisco Mint converted much of the metal to coins.

Establishing a Mint in Nevada was repeatedly called for.

Treasury Secretary Salmon P. Chase favored a Mint in Nevada, while Mint Director James Pollock felt that with existing Mints at Philadelphia, New Orleans (inactive since 1861), and San Francisco, a new Mint would be redundant. It would make much more sense, he felt, to enlarge the San Francisco facility, which at the time was cramped and poorly ventilated. A Nevada facility was to be, however, and the Act of March 3, 1863, authorized it. The Carson City Mint was about to be born.