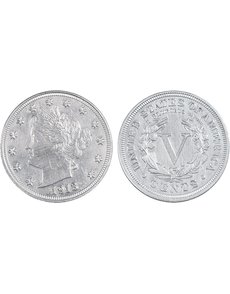 The Walton specimen of the 1913 Liberty Head 5-cent coin, off the market since World War II, will be offered at auction by Heritage in April 2013.

The Walton family specimen of the rare 1913 Liberty Head 5-cent coin will appear at public auction for the first time in its existence when Heritage offers the coin at its Central States Numismatic Society auction in April.

The coin, one of five examples known, is believed to have been off the market since the mid-1940s. George O. Walton, a North Carolina antiques dealer, acquired it in 1945 in a trade worth about $3,750.

When Walton was killed in a 1962 automobile accident, coins were strewn about the crash site. News reports of the accident recounted how law enforcement officers retrieved hundreds of coins, including the 1913 Liberty 5-cent piece still in a custom-made plastic holder.

After the accident, the Walton family consigned the collection to Stack’s in New York City for inclusion in an October 1963 auction. The firm’s staff examined the Walton 1913 Liberty Head 5-cent coin, determined it to have an altered date, and returned it to the heirs.

At that point, the coin essentially disappeared, lost for decades.

Questions eventually arose over whether Walton ever owned a genuine example of the coin, although the Walton family maintained that he had. However, numismatists could not verify the coin’s pedigree after Dr. Conway A. Bolt, who owned the coin briefly in the early 1940s.

In the meantime,two examples of the 1913 Liberty Head 5-cent were donated by their private owners to the National Numismatic Collection at the Smithsonian Institution and to the American Numismatic Association. That left just two coins in the marketplace, to trade at increasingly higher prices. The piece once owned by Louis E. Eliasberg Sr. became the first coin to break the million dollar barrier at auction when it realized $1,458,000 in 1996. More recently, the Olsen specimen of the coin realized $3,737,500 at Heritage’s auction during the 2010 Florida United Numismatists convention.

Todd Imhof, executive vice president of Heritage, said the firm expects the Walton coin to realize $2.5 million or more at the April auction.

Back in the limelight

The mystery of the Walton coin made international headlines starting May 23, 2003, when Collectors Universe offered $10,000 to see the long-missing coin and a minimum $1 million to buy it or consign it through Bowers & Merena auctions, then a division of Collectors Universe.

At about the same time, ANA officials were arranging with the owners of the four known examples of the coin to exhibit them in a high-profile display at its July 30 through Aug. 3, 2003, show in Baltimore. The display would be the first time the four coins were seen together since World War II, when the set of five pieces was broken up and sold.

Using the information provided to him, the reporter located members of the Walton family and interviewed them.

The family also showed him the coin identified as an altered date piece decades earlier. The reporter in turn placed Coin World into contact with the family, who provided Deisher digital images of the suspect coin.

Upon viewing the images July 25, 2003, days before the other coins were to go on display, Deisher urged the Walton family to take their coin to Baltimore, where it could be compared to the other four genuine coins and examined by experts. Behind the scenes, Deisher arranged for inspection of the coin.
Upon examination, the experts determined the coin to be genuine.

The “missing” Walton coin had been “found” in the early morning hours of July 30, the day the ANA convention was set to open.

When the show opened a few hours later, five genuine 1913 Liberty Head 5-cent coins awaited collectors in the exhibit, not four. The discovery of the missing coin electrified the collecting community, and the exhibit of the five coins drew steady crowds at the convention. After the end of the show, the Walton family agreed to place the coin on extended loan with the ANA.

The coin was placed on exhibit at the ANA Money Museum in Colorado Springs, Colo., and has been exhibited at various ANA conventions.

Prior to the CSNS auction, the historic coin will be exhibited by Heritage at the Florida United Numismatists convention in Orlando, Jan. 10 to 12; the Long Beach, California Coin, Stamp and Sports Collectible Expo, Feb. 7 to 9; and the Whitman Baltimore Coin & Currency Expo, March 14 to 17.

The coin is being consigned to the Heritage auction by Walton’s nieces and nephews.

For additional information about the upcoming auction, contact Heritage Auctions, 800-872-6467, or visit online at www.HA.com.