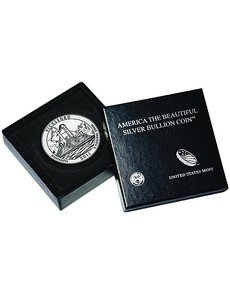 The 2011 Vicksburg National Military Park 5-ounce silver bullion coin will be able to be ordered by the U.S. Mint’s authorized purchasers beginning June 20. The coin is shown in a presentation box available to dealers only.

The coins will be offered by the U.S. Mint on an allocation basis, divided equally among the participating silver authorized purchasers.

The Mint will allocate an initial quantity of 126,700 coins for each of the 2011 bullion coins and may increase the mintage limit beyond the initial release quantities based on market demand and blank availability.

Because the U.S. Mint is striking the 2011 silver bullion coins in numbers considerably higher than the inaugural 2010 issues, officials are not imposing restrictions on how the authorized purchasers may sell the 2011 coins into the secondary market.

The Mint has 12 authorized purchasers, but only nine participated in sales of the 2010 coin.

The APs minimum order quantity for the 2011 silver bullion coins is 10,000 ounces/2,000 coins, with additional quantities available in 500-ounce/100-coin increments.

The premium remains unchanged from 2010, set at $9.75 per coin over the London PM fix of silver.

The price per coins for orders placed June 20 will be based on the London PM fix June 21, with payment made June 22 for June 23 pickup.

A memo will be faxed to each authorized purchaser on the morning of June 20 confirming the allocation quantity. ¦