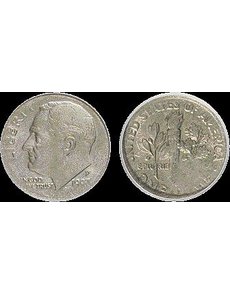 This underweight 1997-P Roosevelt dime was struck on a full diameter, solid copper-nickel planchet. Originally diagnosed as a “missing core” error, we really can’t be sure of its nature and origin. 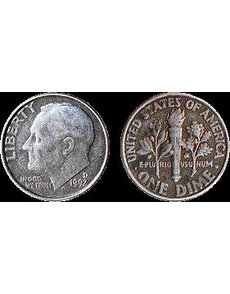 At 2.51 grams, this full-diameter, solid copper-nickel 1992-D Roosevelt dime is much too heavy to be a coreless dime. It is an orphan off-metal error whose purpose, origin and mode of entry into the production stream are unknown. 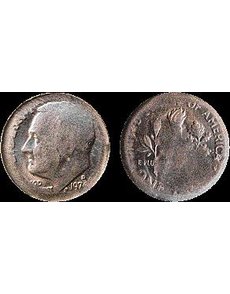 At 0.91 gram, this very thin, full-diameter, solid copper-nickel 1974-D Roosevelt dime may be derived from the trailing or leading end of one copper-nickel clad strip. Scouring marks evident on unstruck portions of the obverse face point to cleaning by a rotating descaling brush.

In the May 8, 2000, “Collectors’ Clearinghouse” column, a new type of planchet error was assigned to a 1997-P Roosevelt dime struck on an underweight (1.85 grams), full-diameter, solid copper-nickel planchet (see photos). Veteran error/variety investigator Mike Ellis decided that it had been struck on a “coreless” or “pure-clad” planchet.

The U.S. Mint wasn’t striking any foreign coins at the time, so Ellis reasoned that this off-metal planchet emerged from a mishap in the bonding mill, a mechanism that assembles the clad sandwich from which dime blanks are punched. Finished dime strip is composed of a relatively thick layer of pure copper surrounded by two thinner layers of 75 percent copper and 25 percent nickel. These are the clad layers or cladding. A dime blank weighs around 2.27 grams. Each clad layer weighs approximately 0.4 gram while the core weighs around 1.47 grams.

The core strip and the two clad strips are substantially thicker when they are first fed into the bonding mill. The three strips are fused together under high pressure between two rollers. Subsequent rolling reduces the thickness of the composite strip to coin thickness.

To explain the solid copper-nickel composition of the 1997-P Roosevelt dime, Ellis surmised that the core strip ran out prematurely and that the two layers of cladding were forced together. The problem with this scenario is that the double layer of cladding should eventually have been reduced to dime thickness (yielding a blank of normal weight). However, it’s possible that the core and one clad strip ran out prematurely and the solid copper-nickel planchet was derived from the trailing end of the other clad strip.

Verification of Ellis’ “coreless” diagnosis would require knowing the precise thickness of clad strip prior to its entrance into the bonding mill. To my knowledge such data has never been released by the U.S. Mint or published in the numismatic literature.

In the absence of this critical data, it’s best to follow a conservative strategy and classify the 1997-D dime as an “orphan off-metal” error. Hardly a year goes by when the Mint doesn’t produce at least some coins that fail to match the specifications of anything it was producing at the time, domestically or under foreign contract. One such coin — a 1996-D Washington quarter dollar struck on a nearly full diameter, solid copper-nickel blank — was reported in the May 10, 2010, Clearinghouse column.

Confidence in the “missing core” explanation for the 1997-P dime has eroded with the discovery of other full diameter, solid copper-nickel dimes whose weights differ markedly from that first specimen. In the September/October 2006 Errorscope, I reported on a 1992-D dime that weighed 2.51 grams — significantly more than a normal dime. Since the density of a solid copper-nickel planchet is virtually the same as that of copper-nickel clad planchet, this dime’s excessive weight effectively rules out any “missing core” scenario, since even improperly assembled dime strip would not be rolled to a thickness greater than a dime blank.

Another full diameter, solid copper-nickel dime was recently acquired in an eBay auction by a contact of mine (see photos). This 1974-D dime is quite thin and weighs 0.91 gram — over twice the weight of a normal clad layer. Its specifications do not match anything the Mint was producing in 1974 or any other year.

One feature suggests that at least this 1974-D example may warrant a “missing core” diagnosis. The unstruck areas on the obverse face show rough, parallel striations while the reverse face is smooth. The microscopic appearance of the rough surface, and its presence on only one face, is very similar to struck dime and quarter dollar clad layers that I have in my collection. The rough surface is created by a rotating descaling brush that cleans one side of each clad strip prior to entry into the bonding mill.