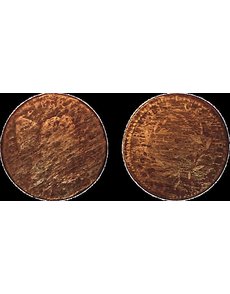 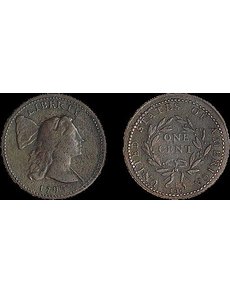 The finest known example, shown, among the now 13 identified 1793 Liberty Cap, S-15 cents is from the collection of the American Numismatic Society. The ANS specimen was donated in 1946 as part of the George Clapp Collection. Clapp acquired the coin in February 1938 from collector A.C. Gies. 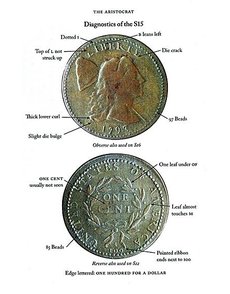 Page 60 from collector Jim Neiswinter’s new reference, The Aristocrat: The Story of the 1793 Sheldon 15, illustrates the diagnostic points used to identify the variety. The book was released in May in conjunction with the Early American Coppers annual convention.

A 13th example of the extremely rare Sheldon 15 variety of 1793 Liberty Cap cent has been confirmed by large cent experts.

It is the first discovery of an example of the variety reported in 80 years.

The July discovery of the coin was reported to Coin World on Sept. 3 by California collector Ron Shintaku, a large cent collector and member of Early American Coppers. Shintaku is not the discoverer of the coin.
Kansas collector/dealer Steve Carr coordinated the identification and confirmation of the variety on behalf of the unidentified dealer-owner; none of the involved parties have revealed when the dealer-owner obtained the coin.

Longtime U.S. copper coin dealer Tom Reynolds also subsequently confirmed the variety. Reynolds then purchased the coin from the coin’s owner, through Carr as an intermediary, and immediately placed it with another California collector, Dan DeMeo.

With the acquisition, DeMeo needs only the ultra-rare and expensive Sheldon 79 variety — the 1795 Liberty Cap, Reeded Edge cent — to complete a collection of 302 varieties of large cents dated 1793 through 1814 by Sheldon attribution numbers as identified in Penny Whimsy by William H. Sheldon.

DeMeo said it’s unlikely that he’ll be able to add an example of the S-79 variety because its cost is prohibitive (the last example to sell at auction was a piece graded Very Good 10 by Professional Coin Grading Service that sold for $1.265 million on Sept. 6, 2009, as part of the Dan Holmes Collection).

The confirmation of the 13th known example of S-15 1793 Liberty Cap cent was made two months after collector Jim Neiswinter’s release of his new reference, The Aristocrat: The Story of the 1793 Sheldon 15. Neiswinter’s book was introduced in May in the Columbus, Ohio, suburb of Newark in conjunction with the Early American Coppers annual convention.

Without the book’s release, Carr told Coin World Sept. 4, he doubts he would have been able to accurately attribute the variety as an S-15.

Neiswinter’s reference includes detailed attribution points of the S-15 cent, including the primary designation of the B in LIBERTY on the obverse leaning to the viewer’s left. This attribution point is not outlined in other noted large cent references.

The S-15 variety is the rarest “collectible” 1793 cent, according to Neiswinter, and second rarest of all the early date collectible cents 1793 to 1814, following the 1795 Liberty Cap, Reeded Edge cent, S-79. Only eight examples of the S-79 variety are known.

(While most cents Sheldon cataloged, even some very rare varieties, are considered “collectible,” he designated some extremely rare pieces as “noncollectible,” and therefore not generally required for a collection of die varieties to be considered complete by Sheldon numbers.)

An example of the S-15 variety, according to Neiswinter, was pictured in the first photographic plate of coins ever produced in the United States, appearing in the April 1869 issue of the American Journal of Numismatics.

Carr initially thought the coin was the S-12 variety when it was presented to him July 7 at a coin show in Kansas City, Mo. The coin is in extremely low grade, which made attribution difficult. Experts grade the coin as having a technical grade of Very Good 7 Details, with a net grade of Fair 2.

Carr said a collector who had temporary possession of the coin from its dealer owner brought it to his table. The owner was seeking attribution.

Over the next three weeks, Carr periodically examined the coin’s details, trying to determine the variety. He said he knew the piece was a Liberty Cap cent from its beaded border. And the edge lettering size and positioning matched that for the 1793 Liberty Cap cents.

Carr said he was also able to rule out the possibility the piece was an expertly weathered Gallery Mint reproduction. The Gallery Mint struck reproductions of U.S. coins, but often modified or added details from the original regular issue coins to be able to differentiate the two.

Carr said with the assistance of his son, Jim, also a large cent collector, he was able to narrow his suspicions of the coin’s variety to an S-12 or possibly even the S-15. He initially leaned more toward the S-12 since an example of another S-15 variety had not been confirmed in 80 years.

However, Carr continued his examination, consulting a number of numismatic references, including Walter Breen’s Encyclopedia of Early United States Cents 1793-1814 and William C. Noyes’ United States Large Cents 1793-1814, neither of which provided the defining diagnostic. The obverse diagnostic point of the B in LIBERTY leaning to the left is also not identified in Sheldon’s book, nor in Sylvester S. Crosby’s Early Coins of America.

Carr brought the coin with him when he attended the Missouri Numismatic Society convention July 25 to 27 in St. Charles. He showed the piece to Reynolds.

Reynolds said Sept. 3 he identified the coin’s date by the beaded border, and initially suspected an S-12 determination because of that variety’s diagnostic center bulge on the reverse.

However, after consulting several references, Reynolds also reached the conclusion the well-worn coin was an S-15 variety.

“I looked at the obverse, which had no date, and wondered how I could tell if it was an S-12 or S-15,” Reynolds said. “All the key identifiers were gone, or so I thought. It turns out the letter B in LIBERTY varies for the two varieties. For a S-12, the B is upright and parallel to the other letters. For a S-15, the top of the B tips backward and it is quite noticeable.”

Reynolds made an offer to buy the coin from Carr, and the deal was consummated after Carr received permission from the coin’s owner to complete the transaction.

While payment was being made, Carr said another large cent specialist, Shawn Yancey, stopped by Reynolds’ bourse table. He, too, examined the coin and confirmed the coin is an S-15 variety.

Carr said the consensus grade he, Reynolds and Yancey reached for the coin was a technical grade of Very Good 7 Details, with a net grade of Fair 2 on the Sheldon 70-point grading scale.

The finest known piece is a Very Fine example donated in 1946 to the American Numismatic Society by George Clapp.

Reynolds immediately sold the coin to DeMeo, who had the coin on his want list with Reynolds. Ironically, DeMeo had passed in 2012 on another example of the S-15 variety from a collection Reynolds was offering by fixed-price list for its owner.

DeMeo said he chose another large cent variety from Reynolds’ fixed-price list, but told Reynolds he would acquire the next S-15 that would be offered. He didn’t let the piece discovered in July get past him.

The coin that DeMeo declined to purchase in 2012 was instead purchased by the next person on Reynolds’ list of customers wanting the variety — Ron Shintaku, the collector who informed Coin World Sept. 3 about the discovery of the 13th known S-15 cent.

The last S-15 variety 1793 Liberty cent coin offered at auction brought the most paid for any of the known examples. The VG-7 example offered Sept. 6, 2009, during Part I of the Dan Holmes Collection of Early Date Large Cents, realized $52,900.

The Holmes auction was conducted by Ira & Larry Goldberg Auctioneers in conjunction with McCawley & Grellman, The Copper Specialists.

Other auction appearances in recent years include two S-15 cents sold by Heritage.

One example, certified by Numismatic Conservation Services, an affiliate of Numismatic Guaranty Corp. as Fine Details, Damaged, sold for $43,700 in a Jan. 13, 2005, Heritage sale.

Another example NCS certified as Good Details, Damaged was sold Jan. 24, 2006, for $25,300 as part of the Jules Reiver Collection.

The example formerly part of the Reiver Collection is the S-15 coin Shintaku purchased at an undisclosed price in May 2012 from Reynolds.

The first known auction of Shintaku’s coin is from the Chapman Brothers’ M.A. Brown sale, held April 16, 1897, according to information provided for Neiswinter’s book by large cent expert Del Bland.

Copies of the 118-page, illustrated reference are still available from the author for $75 plus $5 shipping. Neiswinter can be reached by email at j_neiswinter@hotmail.com. ¦