Found in Rolls: Maybe one has your name on it 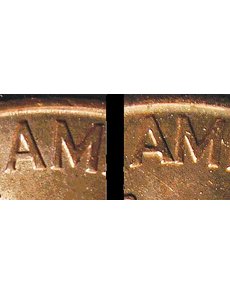 These images display well-known varieties of 1998, 1999 and 2000 Lincoln cents. The wrong dies were used and the AM letters are wider apart, left, than on the correct dies, right, that display the AM letters as nearly touching.

Here we are at the beginning of another year! It is almost 2014 and the only thing I can think of to say is, wow!

As a young numismatist and roll searcher back in the 1960s, I imagined what the world would be like in the year 2000.

I fully expected that cars would float above our roadways and that everyone would have homes that were made of shatterproof glass and steel. I envisioned that the main power source used for all things mechanical would be the sun.

I even thought that by the year 2000 all coins would be a thing of the past.

While, actually, we are able to pay for most of our purchases electronically, I am happy to say that, 14 years after the turn of the millennium, trillions of coins are still available to be searched through to find hidden treasures.

Other roll searchers are making great discoveries, so why not you? Take Pete A. for example. Pete lives in the lower part of upstate New York, sorta — he wants me to be a little vague as to his exact location — and he finds all kinds of fantastic, collectible coins in rolls.

These coins are called Wide AM varieties because circulation-strike Lincoln cents for those years were supposed to be struck with dies that had the bases of the A and M of AMERICA on the coins’ reverses touching each other (known as the Close AM in AMERICA variety).

But in an error at the Mint, Lincoln cent dies intended to be used for the production of Proof cent reverses were used, and on those dies, the A and M of AMERICA are separated from each other.

Wide AM Lincoln cents of 1998 and 2000 are relatively easy to find in coin rolls but the 1999 Wide AM cent is what I like to call a jackpot coin. It is valued at $500 in the Mint State 65 red in the Dec. 2 issue of Coin World’s Coin Values. Pete’s coin was graded as such by Professional Coin Grading Service.

While my finds for this month are not in the jackpot category, they were still fun finds.

I found both the 1998 and 2000 Wide AM varieties in rolls of cents. I have yet to find the 1999 version of this variety, but I know at least one of them still out there has my name on it! There may be one for you too! If you’ve never tried roll searching, now is the time to start!

Please share your finds by sending an email message to me at foundinrolls@netscape.net.