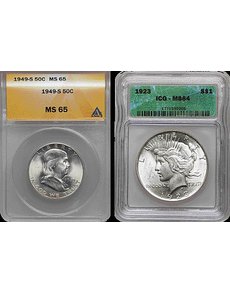 Under a new eBay policy effective May 30, sellers of graded and encapsulated coins such as this ANACS-graded Franklin half dollar, left, and ICG-graded Peace dollar, right, will not be able to list the coins’ numeric grades (in this instance, MS-65 and MS-64) in the auction listing’s title or item description. Both ANACS and ICG are working to achieve compliance with eBay’s new standards for grading services.

Internet auction company eBay announced April 17 that it will implement changes to its coin listing policy that will restrict the use of numeric grades in listings and what coins can be sold without being graded by one of the grading services that meet eBay’s standards, and the policy will introduce new criteria for grading services recognized by the firm.

In a press release and in an email sent to eBay account holders, the firm stated that the modifications to its policy are “to provide shoppers and sellers with greater confidence in their coins transactions.”

This change in eBay’s policy follows on the heels of other recent eBay initiatives, including a ban on sales of replica coins on the website, a move that became effective Feb. 20.

Beginning May 30, all new listings and relistings for coins being sold on the company’s website at eBay must meet the following requirements:

??“Listings for coins will be allowed to include a numeric grade in their listing title or item description only if the coin grading company providing the grade meets certain objective standards. Coins that haven’t been graded by such companies will be considered raw or ungraded.”

??“For U.S. coins only, grading by companies meeting these standards will now be required for all coins listed with a Buy It Now, reserve, or start price of $2,500 and above.”

In the press release, Brooke Segaran, eBay’s senior manager of collectibles, is quoted as saying, “The coin industry is extremely dynamic and exciting, and eBay’s goal is to continue to offer new ways for collectors to connect with dealers in the most trusted experience possible.”

The auction company worked with John Albanese, founder of Certified Acceptance Corp. and Numismatic Consumer Alliance, to develop the standards for third-party grading services that must be met for listing coins as “certified” on eBay.

Under the new rules, grading services must meet the following criteria:

??The grading service must possess a live, online population report.

??The company must employ at least three graders on its staff who are considered “numismatic experts” (according to the eBay policy, “an individual who has been a full-time numismatist for at least five years”). At least one of the three graders should be a member of Professional Numismatists Guild and all three should be members of the American Numismatic Association.

??The firm must have a stated buyback guarantee in writing for coins later determined to be counterfeit, damaged, over- or mis-graded, or misattributed.

??Coins being encapsulated must be kept in “unique, state-of-the-art, tamper-resistant holders with anti-counterfeiting measures” (for example, holograms). Archival materials should be used wherever possible.

??The company must enable online verification of unique serial numbers on its holders.

Currently, eBay states that only Numismatic Guaranty Corp. and Professional Coin Grading Service have met the new standards. However, eBay stated that other third-party grading services that meet these standards are encouraged to contact the company for future eligibility.

Coin World requested from eBay clarification on certain aspects of the new policy, namely: Why did eBay select “pre-1956 coins” as a cut-off date, as opposed to other dates? Will eBay exempt from the $2,500 rule expensive modern coins or sets of coins that aren’t generally certified and are most commonly sold in original U.S. Mint packaging? Were there concerns with coins from other grading services (as opposed to PCGS and NGC encapsulations) that precipitated the change? Was the American Numismatic Association or other coin-related organizations/businesses consulted or did they have any input in this decision?

As of the time this issue of Coin World went to press April 27, eBay officials had not answered these inquiries.

“Many of you have contacted us about the email sent out by eBay regarding changes in their coin listing policies that specifically impact sellers of ANACS graded coins. We want to assure that you that we are absolutely confident that this issue will be addressed by the May 30 deadline that eBay has established. We would also like to take this opportunity to address some of the specific questions that have been raised, and to share with you what we are working on, which we believe will ultimately be of benefit to you.
“In its email to sellers of coins, eBay mentions ‘certain objective standards’ that are required of coin grading companies. We were not made aware of these standards until April 17th — the very same day that eBay chose to notify its sellers of the change. Now that we have been able to review these standards, it is our contention that we exceed every standard that has been set, with the exception of what we consider to be a single technicality.

“Of the six standards that we have seen, we feel it is important to stress that we exceed any standards set with regard to the expertise of our graders or the quality of our service.

“ANACS appreciates that eBay is taking steps to protect the coin community from the actions of unscrupulous sellers and questionable grading practices. It has been our company’s mission to protect the integrity of our hobby for forty years! As stated earlier, we have no doubt that this issue will be addressed in such a way that you will not be affected by this policy change, and we are hopeful that we can work with eBay to do even more to protect both buyers and sellers of coins.”

DeFelice met with eBay officials April 19 during the Central States Numismatic Society show in Schaumburg, Ill., and assured them that the grading service would be eBay compliant by the May 30 deadline. As well, he said ANACS officials support eBay’s coin listing initiative.

DeFelice said that information from the firm’s registry by serial number for each coin the grading service has certified and encapsulated is currently available from ANACS by telephone during normal business hours, but not online.

ANACS had planned to roll out the online registry sometime late this summer or early fall, but the schedule for 24-hour registry access has been moved up to meet the May 30 eBay compliance deadline, DeFelice said.

A message at the front page of the Independent Coin Graders website (www.icgcoin.com) states:
“In recent days, we have received numerous telephone calls and e-mails from our clients questioning the eBay announcement that ICG graded coins will no longer be listed with the grade in the listing title or description as of May 30, 2012. We received notice of this change on April 17, the same day that our clients were notified. We are presently in the process of addressing the standards and requirements set forth by eBay.

“We are confident that we will be able to meet these standards by the May 30 deadline. Our graders are among the most experienced numismatists in the country. ICG-graded and listed coins have been sold on eBay for many years and we look forward to continuing our relationship with eBay in the future.

“ICG takes great pride in the level of service and expertise we provide to our clients and the industry, and we will continue to do so for many years to come.

“Thank you to all our clients who have shared their concerns with us regarding this issue. Rest assured that we will do everything possible to resolve it promptly.”

Larry Briggs, an Ohio dealer and owner of Sovereign Entities Grading Service in Tennessee (www.segsgrading.com), said he didn’t appreciate the firm being considered as a “low-tier” grading service when he believes the collecting community considers his firm among the top five third-party grading services.

As a dealer, Briggs said he does little posting of items on sale on eBay, but buys and sells coins that are encapsulated in holders from multiple firms, as well as raw coins. He said he and SEGS are noted for their variety attributions.

Briggs believes that SEGS will be indirectly impacted by eBay’s policy updates because of the effect the policy will have on collectors who use SEGS and offer such encapsulated coins on eBay as either a part-time or full-time venture.

Briggs expects there will possibly be a slowdown in the number of SEGS-encapsulated coins listed on eBay.

Briggs did not indicate what steps he would take at SEGS to make the service compliant with the new eBay policies and thus permit the numerical grade of SEGS-graded coins to appear in the title and description of listings.

Officials at eBay said while the new policy currently would exclude SEGS coins from being listed with a numerical grade or adjectival-equivalent description alluding to a numerical grade, the coins could still be listed and illustrated showing the grading insert that carries the numerical grade.

The title and description are the elements that eBay buyers use in their searches to locate specific numismatic items.

How eBay’s new policy will impact the market is the primary question that remains to be answered, and is the question pressing on the minds of many hobbyists and dealers who regularly use the auction service.
Collectors posting on message boards such as Collectors Universe (forums.collectors.com) and on eBay’s discussion board (forums.ebay.com) displayed a wide range of reactions to the new policy announcement, with some expressing support of eBay’s actions — or at least the intent behind the policy change — while others expressed frustration, particularly those who buy or sell coins predominantly from grading services other than PCGS and NGC. ¦