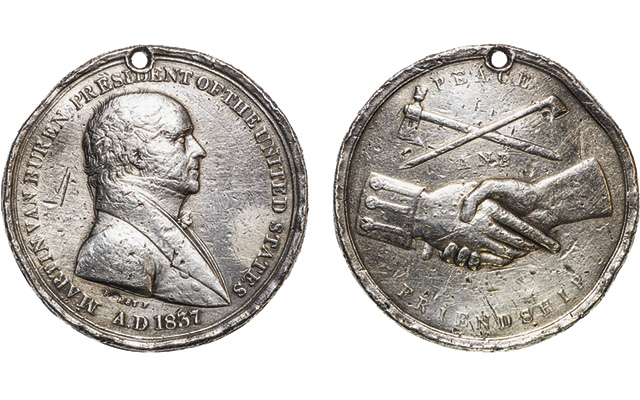 The piece is attributed as Julian IP-19, as cataloged in R.W. Julian’s Medals of the United States Mint: The First Century 1792-1892.

The Van Buren medal is accompanied by an authentication certificate from the American Numismatic Association Authentication Bureau.

The auction lot listing suggests the medal is graded Very Fine, with the following description information on its overall condition:

“Holed at top for suspension as usual, cleaned long ago and retoning with some moderate edge bumps and surface marks, from actually being worn.”

The medal is one of 112 struck of what are referred to as the small-size medals.

After their production at the Philadelphia Mint, the medals were delivered to the office of the Commissioner of Indian Affairs between 1837 and 1839 for presentation to Indian chiefs as diplomatic gifts.

Van Buren Indian piece medals were also struck in a bronze 51-millimeter version, as well as 76-millimeter and 62-millimeter silver and bronze versions.

The size of the medal presented often corresponded to a chief’s importance within his tribe.

The PEACE AND FRIENDSHIP reverse by Assistant U.S. Mint Engraver John Reich first appeared on the reverse of the Thomas Jefferson Indian peace medals of 1801.

Each lot in the Early American sale is subject to a buyer’s fee of at least 20 percent added to the final hammer price of each lot won. The final fee is based on the method by which bids are placed.