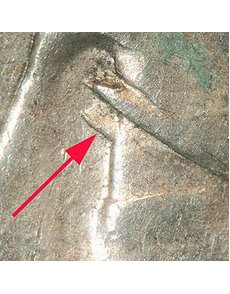 The obverse of the VAM-58 1878-S Morgan dollar is recognizable by the strong spike protruding from the front of Liberty’s eye, at arrow. 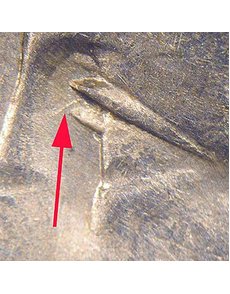 The intermediate and late stages of the obverse also feature a clash mark shaped like an inverted V, shown by arrow, passing through the spike. 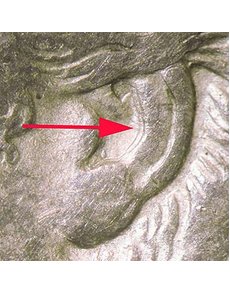 Strong localized doubling and tripling appears on other elements of the central portrait, like the interior of the ear. 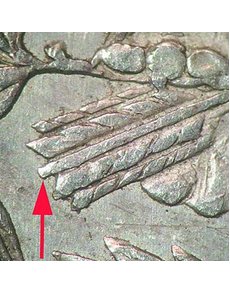 The B1 reverse hub stage is also known as the “long nock” for the relative length of the end of the central arrow shaft.

As the author of the booklet Long Nock: A Guide to the 1878-S B1 Reverse Varieties, it is natural that the dollars of this group are of particular interest to me.

I recently examined two VAM-58 1878-S Morgan dollars. First reported by Jeff Oxman in April 1995, the variety is now listed in the fourth edition of the Comprehensive Catalog and Encyclopedia of Morgan & Peace Dollars by Leroy Van Allen and A. George Mallis. It is one of the nine marriages produced from the initial delivery of dies to the San Francisco Mint in April 1878. They are most readily identified by the long end or “nock” of the arrow shaft in the center of the eagle’s talons.

The VAM-58 variety of 1878-S Morgan dollar is identified by a bold spike protruding from the front of Liberty’s eye. It is actually localized tripling of the die, which is also evident above the eyelid, in the letters of LIBERTY and inside her ear. A typical example has experienced moderate to heavy circulation, masking some of the finer details.

A side-by-side comparison of well-preserved examples reveals the marriage’s progression. At least three distinct stages of the obverse die exist. Fairly early in their life, the dies clashed and were repolished. Examples without clash marks are, naturally, the earlier stage.

A strong inverted V-shaped clash mark is found between the eyelid and the aforementioned bold spike at the intermediate “post-clash” stage.

Later, the obverse developed a strong diagonal crack through the date. This appears to be its terminal stage.

The reverse also is seen with or without clash marks, depending on when it was struck. The clashed and repolished version is the usual stage encountered.

After the distinctive obverse was retired, this particular long nock reverse was also employed for the VAM-56 mintage. Seeing how a piece fits within a progression is much like playing with a jigsaw puzzle. It’s gratifying to be able to see a little more of the picture as it forms.