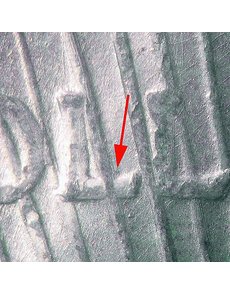 One of the rays of the rising sun was mistakenly re-engraved so it passes over the first L in DOLLAR. 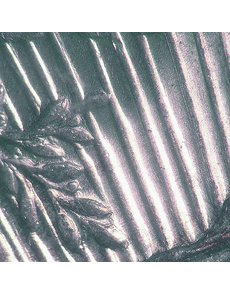 Portions of the reverse die were strengthened by hand engraving, apparent on the rays to the lower right of the olive branch. 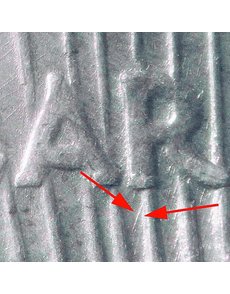 The key variety feature can be difficult to see on worn examples. Secondary diagnostics like these die polishing lines just under the r of dollar, shown by arrows, can help confirm a suspect attribution. 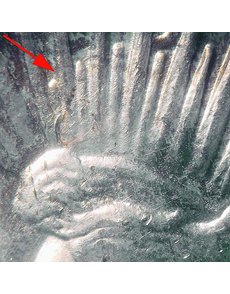 The Official Guide to the Top 50 Peace Dollar Varieties by Jeff Oxman and David Close presents a set of some of the most desirable elements within the series.

The book’s first entry, the VAM-3 1921 Peace dollar (Comprehensive Catalogue and Encyclopedia of U.S. Morgan and Peace Silver Dollars by Leroy Van Allen and A. George Mallis), is well known but still holds a mystery.

Its diagnostic feature is a re-engraved ray that passes over the first L in DOLLAR on the reverse. It is duly noted that the ray should pass under the letter.

The mistake makes it a favorite among collectors. But why was the repair work undertaken? What forced the engraver’s hand?

Other areas of the reverse show evidence of touch-up work. This is particularly apparent in the lower portions of the rays to the right of the olive branch. Repair work of this nature is found on other Peace dollars. Typically it is used to replace or strengthen detail lost through heavy polishing to efface clash marks. Usually, such a coin still exhibits some trace of the offending clash. However, the VAM-3 1921 Peace dollar shows no clear evidence of a clash or its remnants.

Some other type of die damage could have been the motivating factor, but it is also not clearly evident. Further, repair work of a die already in use would make the resultant variety a stage. No earlier use of these exact dies without the touch-up work has been noted to date.

The most likely possibility is this reverse was modified prior to its first use. The variety appears to be in the exact relief as found on other 1921 Peace dollars, so the sort of tinkering with the design undertaken in 1922 could be ruled out with some confidence.

I suspect this is an example of hand strengthening of a die that did not hub properly to its full depth.