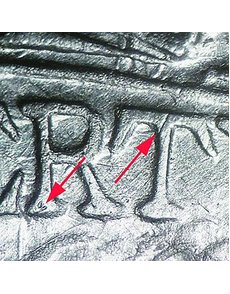 Both marriages of the 1893-S Morgan dollar share the same obverse. The genuine die can be identified by a strong line in the T and a pair of small gouges nicknamed “rabbit ears” in the left foot of the R of LIBERTY, shown by arrows. 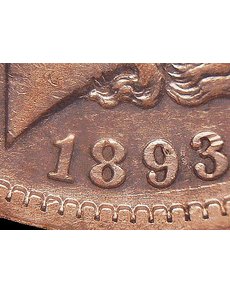 It is important to note the exact position of the date as this is the fastest way to unmask most spurious examples made by adding a Mint mark to a genuine Philadelphia Mint dollar. 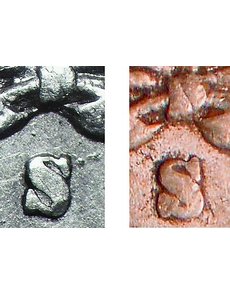 The marriage with the Mint mark tilted to the right, shown left, is now listed as VAM-2. The VAM-1 reverse, right, has its Mint mark well centered, slightly high and upright.

With a mintage of 100,000 pieces, the 1893-S Morgan dollar has long been noted as the key regular issue date for the series and a tempting target for those wishing to make a dishonest buck.

While notations of the obverse markers and two differing Mint mark positions have been included in authentication guides for a considerable time, little was said of the date in the standard VAM reference until this past year. The 2011 edition of New VAM Varieties of Morgan & Peace Dollars by Leroy Van Allen includes more detail about the obverse and listed both reverse dies separately.

A single obverse die was used for the entire legitimate production. It can be identified by its date position, with the left edge of the base of the 1 over the right edge of the third dentil from the point of the neck.

Other attributes of the date on a genuine piece include a slight upward slant for the date that gives the effect of the 3 appearing to be higher than the other digits. The correct date position is not a guaranty of authenticity, but a bad match is a clear indicator of trouble. Most pieces with added Mint marks will fail a comparison of date position.

Other die markers further identify the obverse. Two particularly useful ones are found inside the letters R and T of LIBERTY. In the lower left corner of the R, a pair of die gouges often referred to as the “rabbit ears” should be visible on all but the most worn examples. A diagonal line through the top center of the T is usually plainly visible, but this feature can be weak on late die state examples.

The recently listed VAM-2 variety features a reverse with the Mint mark tilted to the right. This marriage is the earlier of the two, so the obverse markers should be bold; particularly the aforementioned line in the T. The VAM-1 coin is now characterized by the reverse with its Mint mark well centered under the bow knot, vertically upright and slightly high.

The distribution between the two marriages appears to be fairly even and no premium is warranted for one over the other.