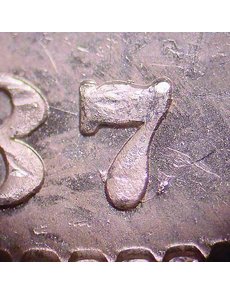 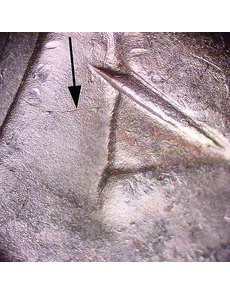 A good secondary diagnostic is the horizontal scratch in front of Liberty’s eye, shown by arrow. 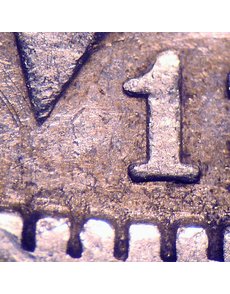 The date begins over the left edge of the third dentil from the point of the neck. 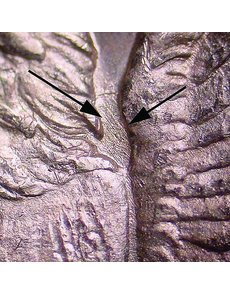 All VAM-2 1887/6 Morgan dollars also share the same reverse. While the die was fairly nondescript, it may be identified by the pattern of scratches between the eagle’s neck and wing, shown by arrows.

Saving time was most likely the greatest motivation behind the creation of most overdates.

In the latter half of the 19th century, sinking a die to its full depth took at least a week to accomplish because annealing was required between each successive blow from the hub. The constraints of time took on added importance for Morgan dollars as their production levels were mandated under provisions of the Bland-Allison Act.

Many collectors consider the 1887/6 Morgan dollar a distinct date and part of the basic set. It has long been included in A Guide Book of United States Coins, the familiar “Red Book.” It was first reported by Ted Clark in 1971 and was described in detail as VAM-2 in the second edition of the Comprehensive Catalog and Encyclopedia of Morgan & Peace Dollars by Leroy Van Allen and A. George Mallis. Michael Fey and Jeff Oxman included the overdate for their collaborative effort, The Top 100 Morgan Dollar Varieties: The VAM Keys.

While an attribution of the variety would seem a fairly straightforward affair, some coins with marks from circulation can confound even an experienced collector. In addition to careful observation of the defining feature, noting secondary diagnostics will ensure an accurate determination.

On the VAM-2 dollar, the curve of the bottom of a 6 is visible protruding from either side of the base of the 7. A tiny spur that is a remnant of the upper portion of the centerstroke of the 6 is found on the center of the upper edge of the crossbar of the 7 on well preserved examples. The date is positioned with the digit 1 beginning over the left edge of the third dentil from the point of the neck. A differing position is conclusive evidence a questionable piece is not the desired variety. This fact is particularly useful when attempting to attribute or cherrypick based on photographs.

With the piece in hand, simply look for a nearly horizontal die scratch in front of the upper half of Liberty’s eye. This marker is unique to this die and found on all stages.