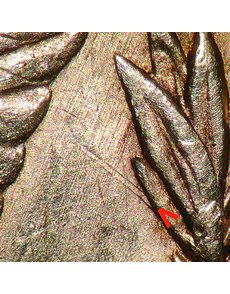 These dies also clashed at least twice. The field inside the top of the right wreath bough displays a doubled clash line from the back of Liberty’s cap. Subsequent die polishing partially removed the evidence. 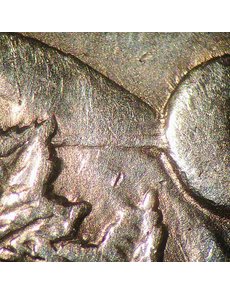 All known stages of the VAM-1B marriage share this strong gouge from the front of the cap fold to the edge of the cotton leaf. 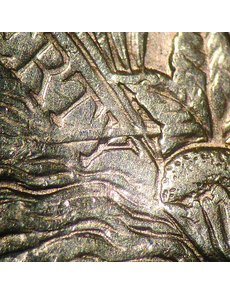 The final reported stage in the “Thornhead” progression is defined by a strong horizontal die gouge through the y of liberty. 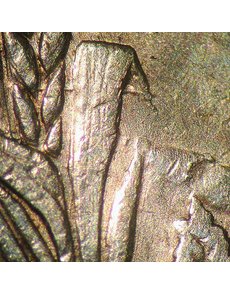 Later stages in this progression had been aggressively polished several times to efface gouges. A portion of the wheat leaf was also polished away.

One of the more interesting examples of die progression involves a marriage employed for some of the 1921-S Morgan dollars. Each of the 10 major and minor identifiable stages of the VAM-1B “Thornhead” die marriage is considered a desirable find, but some of them are truly rare.

Recently, I had the chance to examine one of the rarest stages, the VAM-1B7. It was reported by Michael Fey in April 2004 and was published in New VAM Varieties of Morgan & Peace Dollars by Leroy Van Allen. The stage is believed to be the terminal die state.

The “Thornhead” group acquired its defining characteristics through several incidents of repetitive die damage and aggressive polishing to remove it.

In its earliest reported stage, the VAM-1B1 1921-S Morgan dollar, a prominent “spike” protrudes from the back of Liberty’s Phrygian cap. This is polished away in later stages, but a strong gouge from the inner fold of the cap to the edge of an upper cotton leaf remains throughout the series. The gouge crosses one of the deepest portions of the obverse die, which precluded it being polished away like other similar damage to the die’s fields.

In a series of similar events, most likely unintended contact from a faulty feeder mechanism, the dies change in appearance until the final reported stage.

The VAM-1B7 configuration is defined by a strong gouge from the lower left edge of the uppermost cotton leaf through the y of liberty. Currently, only three credibly attributed examples of the VAM-1B7 variety are known. A clear trading history has yet to be established, but any example would be expected to sell for a significant premium over some of the more frequently encountered “Thornheads.”

In 2009, Jeff Oxman included all of the VAM-1B stages of the 1921-S Morgan dollar in his book Official Guide to the Morgan Dollar Hit List 40. This newfound status has only served to further increase competition for examples of an already desirable variety.