Using the 1964-D Peace dollar to mint a new thriller 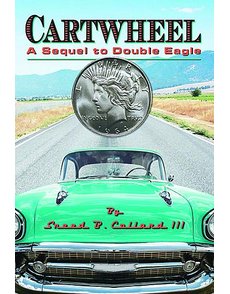 Even after the success of my mystery-thriller, Double Eagle (Peachtree, 2009), I knew I would never write a sequel. Double Eagle follows two 13-year-old boys, Mike and Kyle, as they search for a hoard of Confederate 1861 gold $20 pieces in a Civil War fort in southern Alabama. At the end of the book, the boys part ways, each with one of the coins in his pocket. Although readers demanded a sequel, the improbability of repeating such a numismatic adventure kept me from a second book — until another irresistible premise crossed my desk.

I thank Daniel Carr for fueling my interest in the 1964-D Peace dollar. Until he minted his controversial fantasy version of the coin, I’d never unearthed its history. Once I learned that the Denver Mint had produced more than a quarter million 1964-D silver dollars and then melted them down again, however, I knew that I had to reunite Mike and Kyle.

Although the two central characters remain the same, Double Eagle and Cartwheel travel much different storylines. In Cartwheel, Mike and Kyle look for a coin that really did — and probably still does — exist, instead of a coin that I made up. I also raised the stakes for the two boys. Now, the boys have to find the coin to extract themselves from a disastrous situation. Finally, the book spans much greater geographical and historical territory — territory I naturally had to research in depth.

Research, in fact, has always been one of my favorite aspects of writing both fiction and nonfiction. To research Cartwheel, I traveled to the Denver Mint to get a personalized tour of the facility. I met with Dan Carr to see the amazing coin press he restored. I also corresponded with Michael Lanz, who actually helped mint the Peace dollars in May, 1965. All of this helped feed my own interests in numismatics — interests I’ve nurtured since poring through my parents’ beer stein full of Walking Liberty half dollars and Winged Liberty Head dimes as a child.

Still, I have to admit surprise at the enthusiasm with which today’s young people embrace both Double Eagle and Cartwheel. I visit dozens of schools each year, and am pleased to say that kids are just as intrigued by coins as I was as a youth. Unfortunately, that doesn’t equate to a healthy hobby.

What’s missing today, I believe, are people willing to sit down with youngsters, show them coins and share their passion for the hobby. As a parent of two younger children, I can also say that coin collecting wages an uphill battle against video games, increased homework and chronic overscheduling. This situation isn’t likely to change, but I do believe that books such as Double Eagle and Cartwheel can ignite kids’ interest in the hobby. That will undoubtedly help drive me back to my computer to mint further numismatic adventures.

Sneed B. Collard III has written more than 65 books for young people.