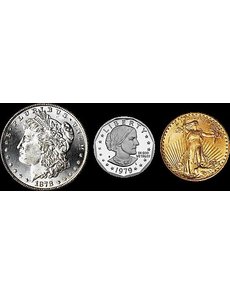 The way certain coins are referred to in the numismatic community is puzzling unless you know the complete story about how the monikers came to be. Left to right, the Bland dollar, the Susie dollar and the Saint gold $20 coin.

Every now and again I like to revisit numismatic nomenclature.

The English language is forever changing, and in everyday life we now have “blog” (not related to anything past that I know of, unless Lewis Carroll used it in some story I haven’t read), “spam” (wonder if Hormel appreciates this adaptation of its luncheon meat name?), crash (of a computer — not of the stock market or two automobiles at an intersection), “lol” (not lollygagging, an old term, but code for “laugh out loud”), “hard drive” (not a trip through the Rocky Mountains or northern Maine, but a computer component), “mouse” (mine doesn’t look like Mickey at all), “web” (Charlotte would not recognize it), “tweet” (nothing to do with a chickadee) and more in the Internet world.

Elsewhere we have “wardrobe malfunction,” “race card” (not to be confused with, for example, a Ferrari), “politically correct” (a Wall Street Journal article some time ago said the media cannot have African Americans, Latinos or just about anyone else as the only criminal in a story, but that businessmen are fair game), and more.

In numismatics, Ken Bressett swept through the early American coinage a few decades ago, and for use in the Guide Book coined (pun) such words as Matron Head, Petite Head, and the like — most of which are now widely used. In my own small way, I think I was the first to use “senior numismatist” to describe a head staffer, and PQ or “premium quality” to describe an exceptional coin.

However, PQ has lost some of its meaning. A leading retailer instructed its telemarketing staff to say, if asked, that all of its coins are PQ. Some years ago, while contemplating a beautiful Swiss music box in my collection of the grand format (impressively musical) I came up with the idea of calling our large coin auction catalogs “grand format.” Now I see that Heritage uses the term, but, interestingly, Stack’s Bowers Galleries presently does not.

Some terms are not standard. Back in 1916, the Mint described the new half dollar design as having Liberty striding. Today, we have either Walking Liberty or, per the Guide Book, Liberty Walking. Similarly, to some a 1916 quarter is Liberty Standing and to others it is Standing Liberty. Did you know that no one had ever heard of a Morgan dollar in the early years of the design? Instead, including in numismatic circles, it was nearly always called a Bland dollar, for Richard Bland, co-sponsor of the 1878 Bland-Allison Act that authorized such coins.

I am running out of space in my column, or otherwise I would mention numismatic terms and nicknames such as “slab,” “crack out,” “Saint,” “Walker” and “Susie,” and tell you that “top pop” has nothing to do with Coca-Cola.