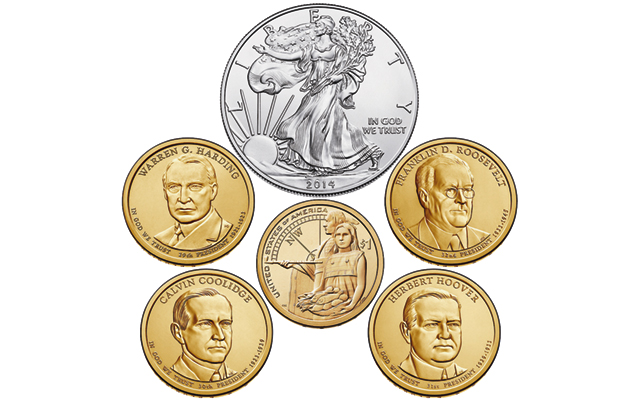 The six-coin set priced at $44.95 on the Mint's website contains four Uncirculated Presidential dollars from the Philadelphia Mint, one Uncirculated Native American dollar from the Denver Mint, and an Uncirculated American Eagle 1-ounce silver coin from the West Point Mint.

The set was made available to purchasers on Sept. 8.

The theme of the 2014 Native American dollar commemorates native hospitality ensuring the success of the Lewis and Clark Expedition, and the reverse design depicts a Native American man offering a pipe, while his wife offers provisions of fish, corn, roots, and gourds. In the background is a stylized image of the face of William Clark’s compass highlighting “NW,” the area of the United States in which the expedition occurred.

The obverse design retains the central figure of the Sacagawea design first produced in 2000.

The Uncirculated American Eagle 1-ounce silver dollar features Liberty draped in the strength of the Stars and Stripes and carrying branches of laurel and oak in her arms to symbolize both civil and military glory. The reverse design features a heraldic eagle with shield and olive branch in the right talon and arrows in the left.