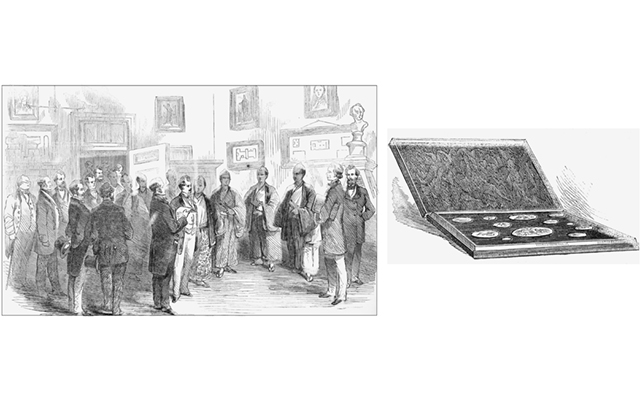 The visit of the Japanese delegation to the Mint on June 13, 1860, resulted in a special presentation of a full set of Proof coins dated 1860.

In recent columns I have told of the rise of the hobby in 1857 when the discontinuation of copper half cents and large cents engendered a wave of nostalgia.

By 1859, the American Numismatic Society and the Philadelphia Numismatic Society were two years old. In that year, the Philadelphia Mint commenced a massive program, kept secret, of restriking Proof coins, patterns and other coins and issuing illogical die combinations, many of which were funneled into the marketplace through dealer William Idler.

Hopes were high in early 1860. A record 1,000 silver Proof sets were produced, 3-cent pieces to dollars, plus an extra 330 silver dollars. The Mint issue price for a copper and silver Proof set climbed from $2.02 (for $1.94 face value of coins) to $3, for a set that contained a copper-nickel Indian Head cent, silver 3-cent piece, Seated Liberty half dime, dime, quarter dollar, half dollar, and silver dollar, again $1.94 face value. Proof dollars were available separately for $1.60 each.

J.B. Lippincott & Co. published a book written by Mint Director James Ross Snowden, A Description of Ancient and Modern Coins, in the Cabinet Collection of the Mint of the United States. Snowden, who initiated the program of restriking rarities, was an accomplished numismatist — the only Mint director in American history for which this can be said. Readers of Coin World in 2014 might not agree with his comment on page 101:

“In giving a history of the coins of the United States we shall not go so far into the details of the subject as to take notice of the different ‘varieties’ caused by cracked dies, the addition or omission of a leaf in the laurel, a larger or smaller letter in the inscription, and the countless other minute and scarcely definable differences which are found, upon close inspection, to exist in the coins of nearly every year in which they have been issued. These little technicalities may be important to those collectors of coins who pay more regard to the selfish desire of having something which no one else possesses, than to the historical or artistic interest which attaches to a coin.”

On June 13, 1860, the Japanese ambassador and his legation visited the Mint and were welcomed by Snowden. A tour of the facilities followed. The guests were shown the coinage process, reserves of gold and silver bullion, and other features. Snowden presented the ambassador with a full Proof set, including gold, fitted in a special case.