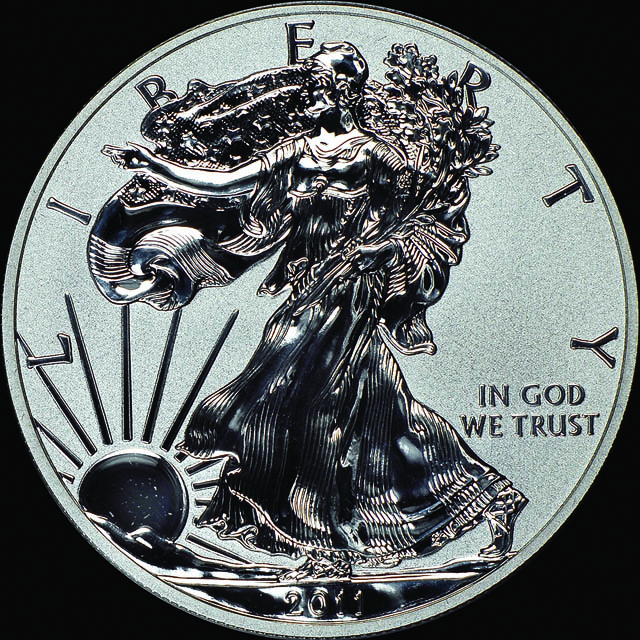 The Reverse Proof finish seen on this American Eagle silver dollar could be used on the coins in a special 2015 Proof set, Mint officials said Aug. 7. In addition, the Walking Liberty half dollar — whose obverse design is replicated on the American Eagle — could receive special commemoration in 2016 along with the Winged Liberty Head dime and Standing Liberty quarter dollar.

U.S. Mint officials provided a few tantalizing details about special collector products under consideration for 2015 and 2016, including a Reverse Proof set and recognition of the centennial of three highly popular silver coins.

A Reverse Proof set is under consideration for 2015 to mark the 40th anniversary of the start of Proof coin production at the San Francisco Mint.

A 2016 program is being considered to celebrate the centennial of the release of the Winged Liberty Head dime, Standing Liberty quarter dollar, and Walking Liberty half dollar in 2016.

Also, Mint officials may place coins with multiple finishes in the standard Proof set starting in 2015.

Coin World learned of the upcoming programs during a meeting Aug. 7 with U.S. Mint Deputy Director Richard A. Peterson and J. Marc Landry, the Mint’s acting associate director for sales and marketing, in Rosemont, Ill.

While details about these possible new products are sketchy, here is what Coin World has learned so far.

At least three and possibly four Proof sets will be offered in 2015, according to Mint officials:

? A Reverse Proof set or sets: This set will mark the 50th anniversary of the production of Proof coins at the San Francisco Mint. The Mint may offer one or possibly two sets — a Reverse Proof set in base metals and, possibly, a set with the silver dime, quarter dollars and half dollar.

??Silver Proof set: The existing 14-coin set will be continued.

Whether the coins in the 14-coin Reverse Proof set will all be base metal or will include .900 fine silver coins has not been decided. However, Peterson said that if just one set is issued, he would prefer the Reverse Proof set to include the silver versions of the dime, quarter dollar and half dollar rather than the copper-nickel clad versions.

A special coin release is being planned by the U.S. Mint in conjunction with the 2015 ANA World’s Fair of Money. Mint officials did not disclose details about the special coin.

The Mint is also looking at multiple product option possibilities for 2016 in anticipation of the centennial anniversaries for the Winged Liberty Head dime, Standing Liberty quarter dollar and Walking Liberty half dollar.

Landry, the Mint’s acting associate director for sales and marketing, said statutory authorization would be required for some options the Mint is considering for a 2016 release in gold, silver and clad compositions.