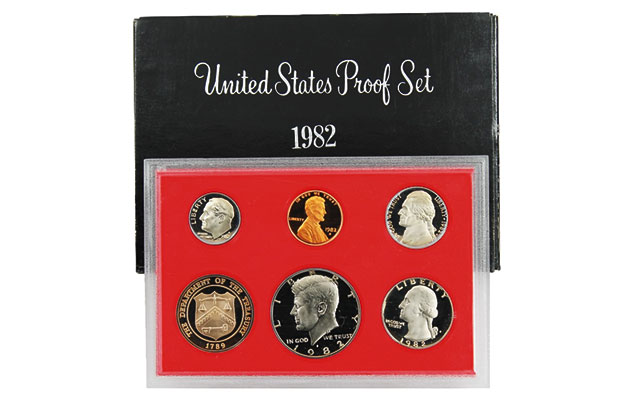 Collectors who ordered 1982 Proof sets were guaranteed delivery by Dec. 31, even though ordering began in February of that year.

Would you wait 11 months for your Proof set to arrive?

Back in 1982 collectors were surprised to find order forms for Proof sets arriving in their mailboxes the last week of January. The order forms were about three months ahead of schedule because the Mint was gearing up to deal with orders for the new commemorative program later in the year.

The cover letter from Mint Director Donna Pope explained that there would be a two-month ordering period for the 1982 Proof set, beginning Feb. 1 and ending March 31. Orders arriving at the San Francisco Mint processing center after the cut-off date would not be accepted. Mint officials guaranteed delivery by Dec. 31.

Customers were limited to no more than five sets per address. Payment in the form of check or money order was required with each order and deposited upon receipt. Once an order was received, it could not be canceled.

Each order was acknowledged with a post card that provided an estimated date of delivery. Orders were date-stamped and processed in the order they were received. If there were more orders accepted than Proof coins produced, the Mint reserved the option to reduce the number of sets delivered, if multiple sets had been ordered. Refund checks would be issued for all unfulfilled orders.

Unless you mailed your order literally the day you received it and received a prompt acknowledgment, you could not be sure of receiving your Proof set.

Collectors as well as dealers played the “numbers game” by having noncollector friends and relatives order for them, resulting in the Mint’s mailing list being four to five times the true number of those actually purchasing Proof sets for their collections.

The 1982 Proof set contained the Kennedy half dollar, the Washington quarter dollar, the Roosevelt dime, the Jefferson 5-cent piece, and the last of the circulating .950 copper Lincoln cents. Even though the new 97.5 percent zinc Lincoln cent would be produced in 1982 for circulation, it was not included. Instead the set included a Department of the Treasury bronze medal. Price for the Proof set was $11, including postage for shipping.