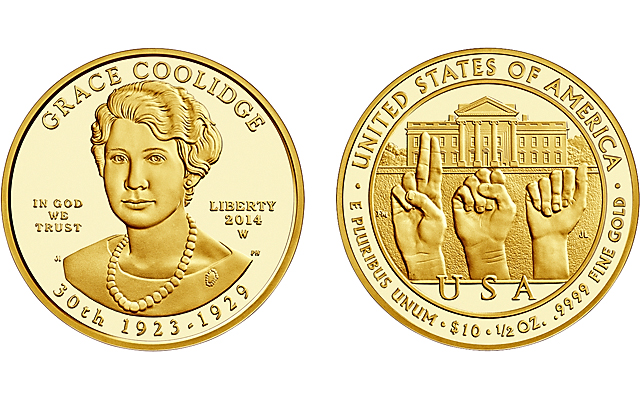 Grace Coolidge is the subject of the U.S. Mint's latest First Spouse Series gold coin, which is set to be released on July 17.

The U.S. Mint’s Grace Coolidge First Spouse Series gold coins will be made available July 17, the second First Spouse release of the month.

The newest First Spouse gold coin, which will come one week after the July 10 release of the Florence Harding edition, will go on sale at 12 p.m. ET. Pricing will be based on the U.S. Mint's gold pricing structure and announced closer to the release.

Coolidge promoted education for the deaf and drew attention to the needs of the disabled, so the reverse, designed by AIP designer Frank Morris and sculpted by Jim Licaretz, depicts three hands fingerspelling the letters "U," "S” and "A" in American Sign Language against the backdrop of the White House.

Proof and Uncirculated versions of the half-ounce coin will be struck at the West Point Mint, with the ratio of Proof to Uncirculated strikes to be determined by customer demand.