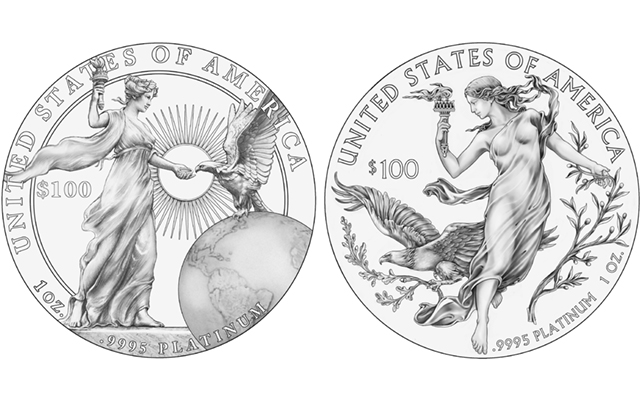 For a two-year program dubbed “Liberty and Freedom,” the above designs were recommended, with several suggested modifications, Sept. 24 by the CCAC for the reverses of platinum Proof American Eagles, for 2015 and 2016. 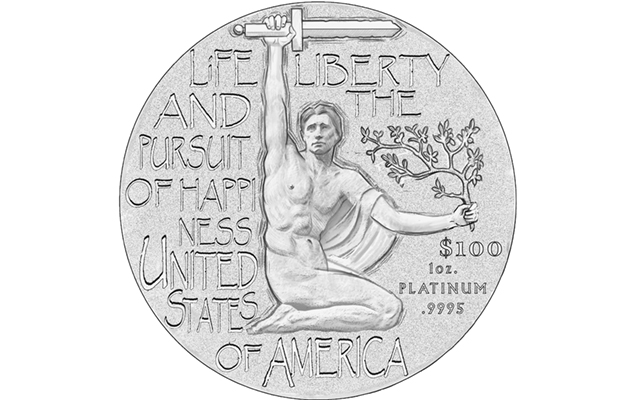 Favored by several CCAC members, the above design was removed from consideration for a 2015 or 2016 Proof American Eagle platinum coin reverse because of potential production difficulties with the predominantly incuse design elements.

A proposed reverse design for a Proof American Eagle platinum coin in 2015 or 2016 was pulled Sept. 24 from Citizens Coinage Advisory Committee consideration after U.S. Mint officials determined incuse elements would be difficult to execute in platinum.

Before it was withdrawn, the design generated high praise from a number of the CCAC members, including chairman Gary Marks and Donald Scarinci, the advisory panel’s resident medallic art specialist. Marks eyed the design as one that could provide the basis for a two-year program with designs stylistically and thematically linked to elements of the Declaration of Independence.

More than half of the 11-member panel had presented their remarks touting the designs they favored when April Stafford, director of the U.S. Mint’s Office of Design Management, consulted with Mint production officials at the CCAC meeting. Stafford then said the design was being pulled.

The withdrawn design depicts a male figure holding a sword “in defense of our Liberties,” according to the U.S. Mint design narrative, while offering an olive branch of peace to the world. The design includes the incuse inscription LIFE, LIBERTY, AND THE PURSUIT OF HAPPINESS.

Antonucci had remarked during the meeting that the Mint had not executed such a design before, noting his concern about insufficient metal flow to fill the design. He did, however, indicate he would like to try such a design if given significant research and development time.

While Marks stressed the need to avoid design by committee, the two 2015 and 2016 designs recommended by the CCAC are accompanied by a number of modification suggestions, each resulting from separate motions on which CCAC members voted.

The recommended obverse for 2015 depicts a female figure symbolizing Liberty continuing to nurture Freedom, represented by an eagle to which she is offering sustenance from a shallow bowl referred to as a “patera.”

The design was one of four linked designs depicting Liberty and an American bald eagle representing Freedom.

It was recommended for the obverse that the patera be removed from Liberty’s hand; that, at the artist’s discretion, the eagle have eye contact with Liberty; the inner border be removed; and the globe be reoriented so North America is shown.

The CCAC rejected a motion to remove the sun and rays.

Instead, Antonucci suggested the rays be reduced in number and each remaining ray made wider for better metal flow.

The reverse design recommended for 2016 depicts Liberty with flowing hair and robe waving in the winds of freedom.

“She holds a torch of enlightenment in her right hand and an olive branch in her left to symbolize peace,” according to the design narrative. “Thirteen olives are included on the olive branch to represent the 13 original Colonies.”

A bald eagle is shown with outstretched wings, “representing its boundless spirit, as it clutches an olive branch in its talons,” according to the design narrative (although the branch the eagle grasps appears to be an oak branch, not an olive branch).

The CCAC approved a motion recommending that the branch in the eagle’s talons be eliminated.

Whatever designs are approved by the Treasury secretary will be paired with John Mercanti’s Statue of Liberty portrait that has appeared on platinum American Eagles since their introduction in 1997.