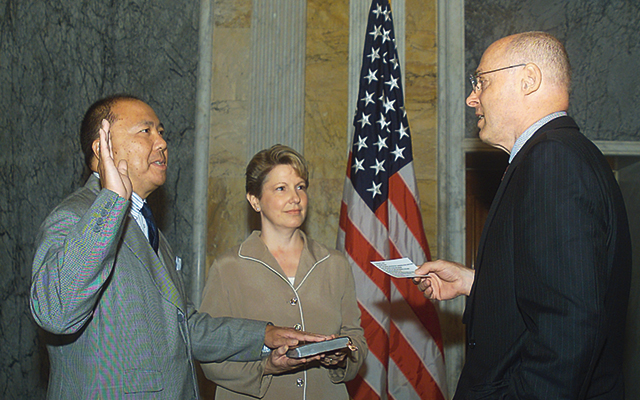 Edmund C. Moy, left, is sworn in as the 38th director of the United States Mint in 2006 by former Treasury Secretary Henry M. Paulson Jr., while Moy’s wife, Karen, holds the Bible.

Image courtesy of the Department of Treasury.

The traditional coin and crypto coin worlds are colliding later this summer.

Former U.S. Mint Director Ed Moy, who recently expressed a positive opinion about virtual currencies, will be the keynote speaker at the Cryptolina Bitcoin Expo in Raleigh, N.C., on Aug. 16, according to a release on the event’s website.

“This is a game-changer,” event organizer Faruk Okcetin said. “Ed Moy is widely respected among the finance and exchange industry, and is among the highest level officials yet to recognize both the future and inevitability of cryptocurrency. The Carolinas are thrilled to be hosting Mr. Moy’s first appearance at a Bitcoin conference.”

The Cryptolina Bitcoin Expo will take place Aug. 15 and Aug. 16 at the Raleigh Convention Center. Moy will speak during a dinner on the second day.

In the piece, the former Mint director says the virtual currency can be beneficial because it is global, it has “infinite divisibility,” and is easy to carry.

“Bitcoin, and the ideas behind it, will be a disruptor to the traditional notions of currency,” Moy writes. “In the end, currency will be better for it.”

The Cryptolina release explains that the goal of the expo is "to raise awareness and serve as a Bitcoin gateway to hundreds of new interested businesses, crowdfunders, investors, students and enthusiasts.”

In addition to public speaking and opinion-writing, Moy has also stayed relevant in the numismatic community by signing Professional Coin Grading Service slabs and writing a book on American Gold and Platinum Eagles.