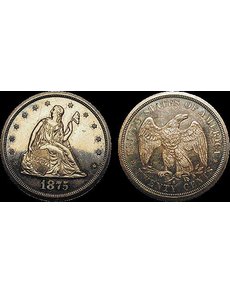 Frost outlined the details of the 20-cent coin book in a presentation Aug. 15 during the LSCC’s annual meeting held in conjunction with the American Numismatic Association World’s Fair of Money in Rosemont, Ill.

Frost said the book will debut in a free online version early in January. The free Web version may not be 100 percent complete upon release, Frost said, but the most important material will be available.

The online edition will include a downloadable die marriage “cheat sheet” for attribution purposes, with links between the book and cheat sheet. Frost said that he and Brunner have already registered the Internet domain names www.doubledimes.com and www.doubledimebook.com.

A 120- to 130-page, 8.5-inch by 11-inch spiral-bound version and special hardcover edition will be available sometime in the spring.

Frost said the reference will chronicle the history of the series, and include narrative and illustrative details on patterns. A section about misplaced dates will present a new theory on how misplaced dates occurred on 20-cent coins. Chapters will also be devoted to ways to collect the series, grading, a date-by-date analysis of all known die marriages, errors and more. An exonumia section will cover love tokens, countermarked coins, contemporary counterfeits, elongates and jewelry.

While the Seated Liberty 20-cent coin was produced for only a few years, the denomination still offers collectors challenges in collecting the die marriages, Frost said.

Frost said that in July, he and Brunner conducted a week-long Double Dime Summit in Sacramento, Calif., during which more than 650 Seated Liberty 20-cent coins were examined.

To illustrate how collectors might find the series challenging to collect, Frost notes that the 1875-S coins examined represented at least 17 die marriages.

During their recent studies, Frost and Brunner examined what might be two previously unreported varieties for the 1875-S 20-cent coins. “We had identified a number of new die marriages, along with previously known ones, and all but two 1875-S coins fit into one of these marriages,” Frost said. “But two individual coins did not, and we needed to re-check them carefully, as we are just being careful before we declare these coins two new die marriages, because they were only seen by one coin each.”

Brunner and Frost also traveled to Nevada to the former Carson City Mint, which now houses the Nevada State Museum. While there, the researchers examined and photographed canceled dies that were discovered in a pit next to the structure during excavations begun in 1999.

Frost said his and Brunner’s research has determined that only one pair of 1876 dies, with the reverse a doubled die, were used for 1876-CC 20-cent coins.

Frost said it was assumed that only two die pairs had been used for the 1875-CC Seated Liberty 20-cent coin production. At the show, on opening day, Frost said he met with collector Mark Obstalecki, who showed him his newly discovered 1875-CC 20-cent coin from a third reverse die. Frost said he confirmed a new reverse die discovery.

On Aug. 14, Frost said he located at a dealer’s table on the bourse another previously unknown die marriage for the 1875-CC coins — a previously unidentified pairing of two known dies.

“So we went from two marriages to four in under 24 hours,” Frost said. “Never stop looking!” ¦