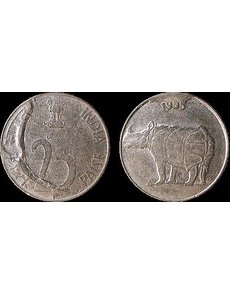 This 1995 25-paise coin of India displays a long die crack on the left side of the obverse face. A die subsidence error in the form of a blunt ridge runs along the lateral side of the die crack. 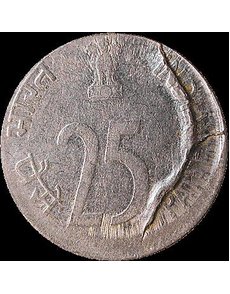 A second 1995 25-paise coin shows a long bilevel die crack on the right side of the obverse face. Here the blunt ridge runs along the medial side of the die crack. 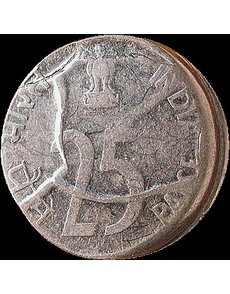 The obverse face of this 1995 25-paise coin was struck by a shattered die. Most of the intersecting bilevel die cracks run alongside or within blunt ridges that represent areas where the die face sank in. 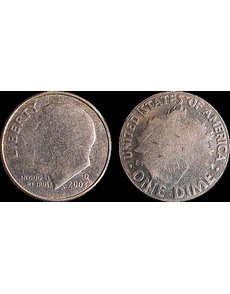 While this column focuses primarily on U.S. coins, it’s sometimes necessary to go further afield, as certain error types are found only among foreign issues.

For error collectors focused on pattern and process, national boundaries are irrelevant. Unusual world errors are not only instructive in illuminating the outer reaches of minting malfunctions, but they prepare the mind to eventually recognize similar errors among domestic coins.

Die subsidence errors can affect the entire die face or be quite localized. They may be associated with cracking or splitting of the die face. When present, these cracks can skirt, encircle or penetrate the zone of subsidence. This effect is seen on the illustrated 2003-D Roosevelt dime, on which two radial die cracks disappear into a large, centralized zone of subsidence.

I’ve encountered one manifestation of die subsidence on only the obverse face of stainless steel India 25-paise coins produced in 1995. (This denomination carries the image of the great one-horned Indian rhinoceros on its reverse face, which is typically struck by the hammer die. Inaugurated in 1985, this design — along with the denomination — was retired in 2011.) Over the years I’ve acquired three examples that display softly defined ridges that faithfully follow the course of associated die cracks. These ridges correspond to low valleys in the die face that represent zones of subsidence.

Our first 1995 25-paise coin shows a long rim-to-rim die crack (or possibly two contiguous die cracks) on the left side of the obverse face, which was struck by the anvil die.

In this example, ridge development seems largely confined to the lateral side of the long die crack. The reverse face has a small cud (marginal die break) above the date.

Our next 1995 25-paise coin was struck off center. It shows a long, rim-to-rim, bilevel (stepped) die crack on the right side. Bilevel die cracks are characterized by vertical displacement instead of lateral spread. A blunt ridge runs along the medial margin of the bilevel die crack. A short conventional die crack extends in from the coin’s edge to the main crack.

Our last and most dramatic example was struck off center with its right side resting on top of a stiff collar. The obverse face was struck by a shattered anvil die. Many of the intersecting die cracks are bilevel, while a few are of the conventional sort. Most of the cracks run within, and are sometimes obscured by, the now-familiar blunt ridges. One low, straight ridge cuts obliquely across the number 25 and doesn’t appear to be accompanied by a die crack in the middle of its course.

The formation of these linear zones of subsidence cannot simply be chalked up to the rigors of striking steel planchets. This issue was produced for 26 years and the phenomenon doesn’t appear in any other year. The equally hard, stainless steel Indian 50-paise coin never suffered from this problem. And, of course, the U.S. 1943 Lincoln zinc-coated steel cent planchets didn’t cause their dies to cave in.

The die steel used for these small coins in 1995 must have had a problem. Perhaps the wrong type of steel was selected, or perhaps the rod of die steel was sloppily forged, leaving it with too many contaminants or internal flaws. Perhaps faulty annealing, tempering or quenching was at fault. As to why only the anvil die is affected, I haven’t a clue.

Whether the valleys in the die face appear before, after or simultaneous with the development of the die cracks is not entirely clear. It’s quite possible the developmental sequence is variable.