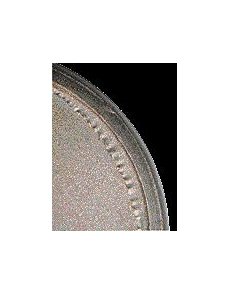 Carrying an off-center Jefferson 5-cent design, this planchet shows an unusual pattern of upset. It may actually be circumferential pre-strike damage that erased the original upset. 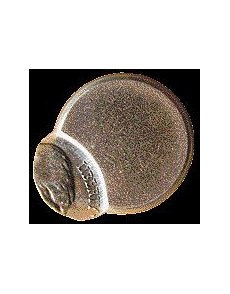 A pronounced proto-rim and a long, beveled rim/edge junction are seen on this off-center Jefferson 5-cent coin. 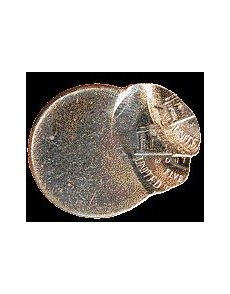 A typical pattern of upset for 5-cent coins is seen on this double-struck example. 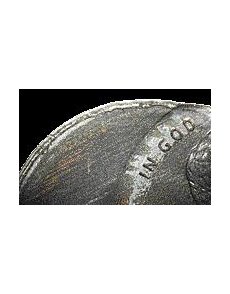 In addition to an abnormally distributed and inadequate amount of copper plating, this cent planchet shows a flat, vertical edge and a narrow, sharp proto-rim. 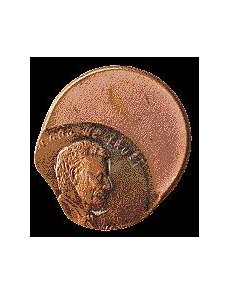 A second off-center Lincoln cent shows a typical pattern of upset with a low proto-rim and a beveled rim-edge junction. 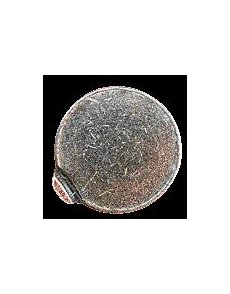 Barely caught by 5-cent dies, this peculiarly bright planchet has a narrow, sharp proto-rim and a flat edge.

Before a blank can be considered ready for coining, it must pass through an upset mill. Here the blank is squeezed to a smaller diameter and is simultaneously provided with a low proto-rim at the outer margin of each face. In this way a blank becomes a planchet.

1. The reduced diameter allows the planchet to fit easily into the collar.

2. Upsetting smooths out the rough edge left by blanking.

3. The proto-rim makes it easier for the design rim to strike up.

4. Planchets pass through machinery faster and more smoothly than blanks, since only a narrow ring is in contact with any flat surface.

5. Planchets don’t have the same tendency to stick together that blanks have.

6. The proto-rim protects the interior of the planchet from abrasion.

The upset mill consists of a rotating drum and a fixed half-ring. Each element has a series of V-shaped grooves cut into it. The blank is fed into a facing pair of grooves and is propelled (rolled along) by the rotation of the drum. The distance between the deepest parts of the facing grooves shrinks as the blank moves along the half-ring. This gradually squeezes the blank to the diameter of a planchet.

Planchets for 5-cent coins generally show a flatter edge and a lower proto-rim, with a very narrow bevel at best.

Some planchets show a pattern of upset that falls well beyond the normal range of variation. Our first example is an off-center 5-cent coin with a pronounced proto-rim, wide bevel and narrow, flattened center strip.

Far stranger is a 5-cent coin that previously appeared in the Jan. 23 “Collectors’ Clearinghouse” column. As shown in the close-up photo, the proto-rim is tall and wide with a sharp internal margin. A thin pleated apron extends in from the proto-rim. The gently sloping outer surface of the proto-rim almost looks machined. The edge of the planchet is strongly convex in cross-section.

Neither example bears any resemblance to a typical pattern of upset, illustrated here by a double-struck 5-cent coin. Here the edge is wide and flat, the beveled zone is very narrow, and the proto-rim is very low.

Atypical patterns of upset may reflect any of the following circumstances:

2. Grooves with wear or damage.

3. Grooves with an experimental cross-sectional contour.

4. Use of an upset mill intended for another denomination, domestic or foreign.

5. Circumferential pre-strike damage that happens to resemble the effects of upsetting.

I suspect the 5-cent coin with the pleated apron falls into the last category.

The next coin up for consideration is an off-center zinc cent with just a dusting of copper plating distributed in a bulls-eye pattern. The edge is completely flat and vertical, and the proto-rim is tall, thin and sharp. It’s quite different from a second off-center cent which shows a typical pattern of upset.

The minimally plated zinc cent is rather similar to our last example, a presumed 5-cent planchet struck way off-center. The edge is flat and the proto-rim is thin and sharp. The surface of the planchet has an unusual bright gleam.

Other photos of oddly upset planchets can be found in the September/October 2005 Errorscope.