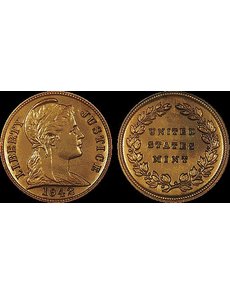 The market has exploded in recent years for 1942 brown plastic tokens made by Tennessee Eastman Co. as part of tests for the Mint. They’re popularly collected as pattern coins and this example sold for $4,715 in a 2010 auction.

In the last several years, collectors have had to pay increasingly stronger prices at auction for experimental 1942 pattern “cents” made of plastic, glass and other unusual compositions. A large part of this increased demand likely stems from the pieces reaching a larger audience via inclusion in reference books.

The history of these interesting pieces was described by researcher Roger W. Burdette in the Nov. 26 issue of Coin World. The 1942 pieces were tests of experimental compositions and were privately produced at the request of the United States Mint.

For a long time, these trial pieces were relatively affordable. A decade ago, examples could be found at the $400 to $600 level.

Originally the key text in the U.S. pattern coin series, J. Hewitt Judd’s book United States Pattern Coins, noted the existence of but did not fully describe or number the issues.

They were included and numbered in Andrew W. Pollock III’s 1994 book United States Patterns and Related Issues, but the market really took off after the 2003 revision of Judd’s pattern book by Whitman Publishing, where the 1942 patterns were assigned the numbers Judd 2051 to Judd 2069.

Burdette points out that the same Judd number has been applied to pieces that differ from one another, complicating matters further.

Perhaps Burdette’s forthcoming reference book on the patterns and experimental pieces of World War II will continue the legitimation of these patterns and further enhance the market for them by exposing them to a wider audience. ¦