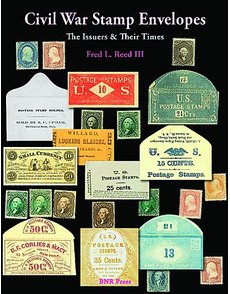 The latest book from numismatic author and researcher Fred L. Reed III covers the history and values of envelopes issued to hold Civil War-era postage stamps used as currency, along with stories of the envelopes’ issuers. 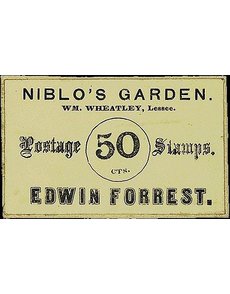 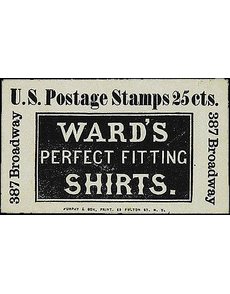 The “untold story” of Civil War stamp envelopes and their issuers is now being told.

In Civil War Stamp Envelopes, The Issuers and Their Times, the latest book by numismatist and researcher Fred L. Reed III, collectors will learn about the varied lives of the issuers of postage stamp envelopes.

For a time during the Civil War, postage stamps served as small change. Hoarding of small denomination coins during the war created a real need for a substitute. In July 1862, Congress monetized postage stamps, thus permitting their legal use as substitutes for coinage.

As a solution to the easy soiling, private printing firms offered specially printed envelopes to hold stamps to be used as currency. The envelopes were printed with text indicating the supposed value of their contents. Many merchants would advertise their business on the front of envelopes used to keep the stamps handy. (A subsequent solution was the encased postage stamp — a stamp placed within a brass holder bearing an advertising message and a mica window for displaying the stamp and its denomination.)

Reed told Coin World that his new book provides collectors of these envelopes, and even those who aren’t yet collectors, information about the uniqueness of these collectibles.

“There’s nothing like it [the book] to get inside the small change difficulties of 1862, except perhaps for my encased stamp book, of which this is a companion volume,” he said. “This book tells the ‘other half’ of the story of private money initiatives in the face of gross government malfeasance to supply a circulating medium for fractions of a dollar for a half year [from] July 1862 to February 1863.”

Reed said the stories behind Civil War encased stamps “are well chronicled” but no one took the time to compile them together before the release in 1995 of his book, Civil War Encased Stamps: The Issuers and Their Times.

That book serves as a merchant chronicle catalog, auction summary and counterfeit guide to the mica and metal store card emergency money of 1862 developed by inventor and entrepreneur John Gault of Boston.

He said the new book “demonstrates the rarity of the 514 different varieties cataloged” and most of the varieties are illustrated and their provenance provided.

After collectors read his latest book, Reed said he hopes they “will make informed decisions based on facts and not fantasy.”

He said he also hopes that the book with be enjoyed by collectors enough that they will “talk it up to other collectors, and eventually buy the second revised edition of my encased stamp book too when it comes out in 2014.”

Reed said his original research provided him with some great stories about the merchants who issued these envelopes.

He said many of the envelope issuers “were incredibly accomplished in their business and professional lives, but others suffered incredible hardships.”

One example Reed offered was the story of a merchant who was shot “outside his tavern by a disgruntled soldier and literally died in the street. Another [issuer] committed suicide by literally taking a long walk off a short pier into the Hudson River. Yet another hosted the meetings that led to the first unified collegiate football rules and association in this country.”

Two more books, one about federal and private postage currency and the other about Civil War-era counterfeiting, are in the process of being written, according to Reed.

Reed is also a monthly columnist for Coin World, writing the “Spare Change” column about store cards and other tokens from the 19th century and later.

Books are expected to ship in mid-October, according to Reed.

Those placing orders should indicate if they want their book autographed.